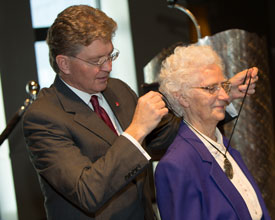 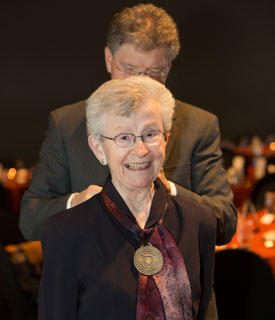 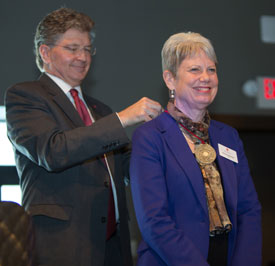 MaryAnn Baenninger smiles as she receives her medal from Michael Hemesath.

The luncheon focused on CSB's Centennial and celebrated three of the 14 presidents who have led the college in its first 100 years.

Renner and O'Connell enrolled as students at CSB in the fall of 1945, when the school had just 300 students. Both joined Saint Benedict's Monastery, earned graduate degrees, taught at their alma mater and eventually became consecutive presidents of the college - Renner from 1979-86, and O'Connell from 1986-96.

During those 17 years, CSB grew to 2,000 students, built nine new buildings and renovated five others, raised $37.5 million and conferred more than 7,500 degrees while furthering the school's coordinated relationship with SJU.

Hemesath then presented Baenninger with the SJU Presidential Medal and Citation for her decade-long leadership of CSB. Among the items she was cited for was establishing a Phi Beta Kappa chapter at CSB and SJU, which raised the academic profile of both schools; her commitment and support of campus diversity and global awareness; and her advocacy of the liberal arts.

Baenninger, who became president of CSB in 2004, is stepping down from the presidency on June 30. She has been hired as the next president of Drew University, a national liberal arts university in Madison, N.J., and will begin her new position July 21.