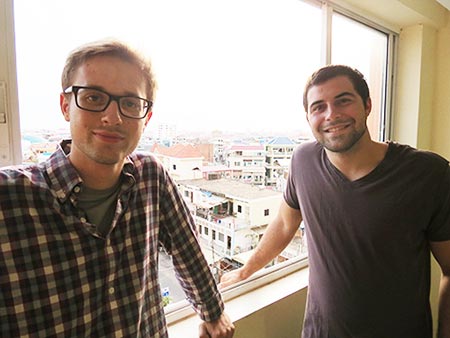 Tony Jensen '12 (left) and Evan Cobb '12 are both currently serving in the Peace Corps in Cambodia.

By offering classes that foster a global perspective and creating a culture of service-mindedness, Saint John's University has inspired 232 alumni to serve in the Peace Corps since the agency was created in 1961.

Coincidentally, two of the five Saint John's alumni currently in service departed on the same day, for the same assignment, in the same country, and together, they're making a difference in Cambodia.

Evan Cobb and Tony Jensen both graduated in May 2012 from Saint John's and departed for service in July 2012. Cobb, of Becker, Minn., double-majored in peace studies and psychology, and Jensen, of Marshall, Minn., earned his degree in history and political science with a concentration in international relations.

Although they weren't close friends in college, Cobb and Jensen say the campus was small enough for them to share some experiences. Interestingly, before Peace Corps, another overseas experience linked the volunteers.

"Saint John's has had a special connection to Bosnia-Herzegovina, since a number of Bosnian men and women were able to attend the College of Saint Benedict and Saint John's University beginning, I believe, in the early 2000s," Jensen said. "In the summer of 2011, I had an internship at a development foundation named EkoMozaik in Sarajevo through the school's Center for Global Education and was able to meet many of the Bosnian alums of CSB/SJU."

Later that year, Cobb traveled to Bosnia-Herzegovina to work on the Extending the Link student documentary film, "Obnova."

"This obviously provided us with some interesting connections, knowing many of the same people through completely different chances," Cobb said. "It has been awesome sharing that connection and being able to talk about it. We have tentative plans to get back to Bosnia and Herzegovina in the future since we both loved our time there."

For now, the Saint John's alums live about six hours apart but swap text messages and meet up in Cambodia's capital regularly to share their experiences. Both volunteers are English teachers and work in Cambodian high school classrooms, often alongside Khmer teachers. They also tackle secondary projects that align with their personal interests and help their communities. Jensen is organizing a three-day gender and leadership camp; Cobb sponsors a reading and writing club and plays badminton with his neighbors and host mother.

"I have been interested in living and working abroad since high school," Jensen said about his inspiration to serve. "Peace Corps offered a great opportunity for me to do this, while at the same time allowing me to get out of my comfort zone and to immerse myself in a culture that is in many ways significantly different from my own."

Both Jensen and Cobb live with host families, and they say these relationships are among the most special they've formed in their services.

"I am simply amazed at how they are able to handle all the hassles of taking on a foreign stranger and quickly adopting them into their family," Cobb said. "Also, they provide a great avenue to understand and interact with the Cambodian culture on a very in-depth level."

Just as their host families provide support in country, the volunteers are also guided by the values and knowledge instilled in them during their education at Saint John's. Classes in history and political science provided a broad worldview and helped prepare them for international service. Saint John's also taught him to "put people first," Cobb said.

"I believe the Benedictine values emphasized by Saint John's such as community living, dignity of work, the common good, and moderation are also very applicable not only to the lives of those adhering to the Rule of Benedict, but also in a secular sense to a Peace Corps volunteer," Jensen said.

Jensen and Cobb are less than halfway finished with their 27-month services, but both say their Peace Corps experiences have already proven influential as they start to consider what life after Cambodia might hold. Graduate school and more international travel are strong possibilities for both of them.

"My service has given me a boost of wanderlust, but with a sustainable tint," Cobb said. "The wonder that comes from the differing cultures is something that I can't get over and plan on finding more of, but I want to be contributing back to these people and places that amaze me."

No matter where their adventures take them, the volunteers will leave service with a unique friendship they only had to travel to the other side of the world to discover.

"It was of course very surprising to find out that I would be serving with a fellow Johnnie," Jensen said. "Overall, our time at Saint John's has been a great shared connection to have, and I am really glad that we have been able to serve together and become close friends since arriving here."