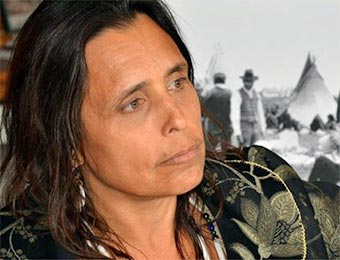 If things would have been different, Winona LaDuke might have been the third vice president of the United States who lived in Minnesota.

As it is, LaDuke is an internationally renowned environmentalist and political activist. And at 7:30 p.m. Tuesday, Sept. 10, at Pellegrene Auditorium (note change of site), she will deliver the keynote address at the 32nd annual Peace Studies Conference at the College of Saint Benedict and Saint John’s University.

“Native Resilience: Overcoming Assimilation Through Education and Action” is the theme of the conference, which is free and open to the public. It includes two panel discussions and a screening of the movie “The Eagle and the Condor: From Standing Rock with Love,” which will take place at the Centenary Room (room 264), Quadrangle Building, SJU.

A two-time vice presidential candidate with the Green Party’s Ralph Nader in 1996 and 2000, LaDuke lives and works on the White Earth Reservation in northern Minnesota.

She is the program director of Honor the Earth, working on the issues of climate change, renewable energy and environmental justice with Indigenous communities.

Within her community, LaDuke is the founder of the White Earth Land Recovery Project, one of the largest reservation-based nonprofit organizations in the country. The project is a leader in the issues of culturally based sustainable development strategies, renewable energy and food systems. It received the 2003 International Slow Food Award for Biodiversity, recognizing the organization’s work to protect wild rice from patenting and genetic engineering.

A graduate of Harvard and Antioch universities, she has earned a number of awards, including being inducted into the National Women’s Hall of Fame in 2007. In 1994, LaDuke was nominated by Time Magazine as one of America’s 50 most promising leaders under the age of 40. She was awarded the Thomas Merton Award in 1996 and the Ms. Woman of the Year (along with the Indigo Girls) in 1997.

The conference begins at 12:45 p.m. with a panel discussion featuring students from CSB and SJU, “From Assimilation to Revitalization at CSB/SJU.” The students will be presenting research on the experiences of Indigenous students on the campuses, past and present.

“Reclaiming Native Spaces in Education and Politics” is a panel discussion that begins at 2:30 p.m. Panelists include:

The movie “The Eagle and the Condor: From Standing Rock with Love,” will be shown at 4 p.m.

The film features the stories of the resilience and resistance of modern Indigenous people in the face of extractive industry. According to the movie’s website, “the larger context of the film is the historic unification of Indigenous nations at Standing Rock protection actions in 2016-17 — when the Lakota people reignited their Seven-Council-Fire and where Central and South American nations, represented by the condor, joined forces with their North American brothers and sisters, symbolized by the eagle.”