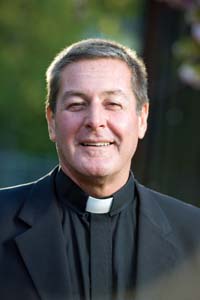 Saint John's Abbey and University will present its Pax Christi Award to the Rev. Richard Frechette on Friday, April 19, in Collegeville. The award will be presented during a private dinner.

Frechette will give a public talk titled "Hope for Haiti" at 2:30 p.m. April 19 in the Alumni Lounge (Quad 170) at SJU. The talk is free and open to the public.

A Passionist priest, physician and missionary, Frechette has been serving impoverished children and orphans for more than three decades.

Frechette has worked with Nuestros Pequeños Hermanos (NPH), also called Our Little Brothers and Sisters, since 1979. Through his work with NPH and Friends of the Orphans, Frechette has provided health care, education and love to hundreds of thousands of children.

As the highest honor awarded by Saint John's Abbey and University, the Pax Christi Award recognizes those who have devoted themselves to God by working in the tradition of Benedictine monasticism to serve others and to build a heritage of faith in the world.

The award has been presented to 59 individuals, dating back to 1963.