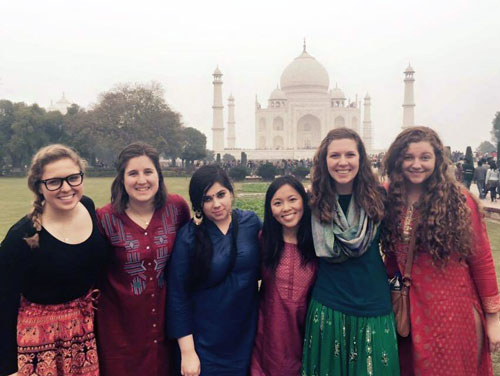 Pictured are several CSB students in front of the Taj Mahal during their spring 2015 semester abroad program in India.

For the 12th consecutive year, the College of Saint Benedict and Saint John's University are ranked among the top baccalaureate schools nationally for the total number of students who studied abroad.

That was one of the findings of Open Doors 2016, the annual report on international education published by the Institute of International Education (IIE).

Before graduating, 56 percent of all CSB and SJU students will participate in a study abroad program. Annually, CSB and SJU offer students 19 semester-long programs, 15 of which are faculty-led. CSB and SJU also conduct more than 20 short-term programs.

"Our rankings in the report confirm our position as nationally recognized leaders in the field of education abroad," said Joe Rogers, director of the Center for Global Education at CSB and SJU. "It is a very important part of our identity here at CSB and SJU, and it is something that both attracts students to come here and an engine for producing globally engaged citizens.

"We are one of very few liberal arts colleges with students and faculty currently onsite with visitor status at the United Nations Climate Change Conference in Marrakesh, Morocco. We are also leaders in the number of students who participate in the Fulbright Program after graduation. To be a Bennie and a Johnnie means that you are engaged with the world. We are proud of that tradition," Rogers added.

The Open Doors report found that 313,415 Americans studied abroad for academic credit from their colleges and universities in 2014-15. That represented an increase of 2.9 percent over 2013-14. The leading destinations for U.S. students are the United Kingdom, Italy and Spain.

International students studying at U.S. colleges and universities surpassed one million for the first time in the 2015-16 academic year, increasing by 7 percent to a record high of 1,043,839 students. The top origin countries for students coming to the U.S. are China, India and Saudi Arabia.

The release of the Open Doors report comes during the celebration of International Education Week Nov. 14-18.