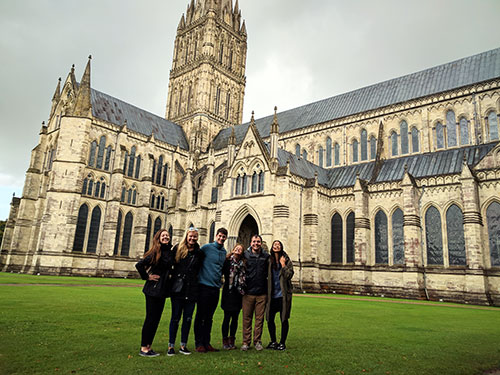 The College of Saint Benedict and Saint John’s University continued an amazing streak on Tuesday, Nov. 13.

For the 14th consecutive year, CSB and SJU are ranked among the top baccalaureate schools nationally for the total number of students who studied abroad.

That was one of the findings of Open Doors 2018, the annual report on international education published by the Institute of International Education (IIE) in partnership with the U.S. Department of State’s Bureau of Educational and Cultural Affairs.

“The Open Doors report underscores the importance that CSB and SJU place on global engagement,” said Kevin Clancy, director of the Center for Global Education at CSB and SJU. “The report also shows that international education and study abroad is very much a part of our DNA.”

The 2018 Open Doors report found that 332,727 Americans studied abroad for academic credit from their colleges and universities in 2016-17. That represented an increase of 2.3 percent over 2015-16. Approximately one in 10 U.S. students study abroad during their undergraduate career, with the leading destinations for U.S. students being (in order) the United Kingdom, Italy and Spain.

International students studying at U.S. colleges and universities was a record 1,094,792 students in 2017-18 (an increase of 1.5 percent), topping the 1 million mark for the third consecutive academic year. The top origin countries for students coming to the U.S. were (in order) China, India and South Korea.