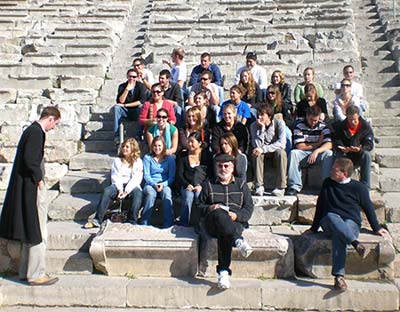 The College of Saint Benedict and Saint John's University are ranked No. 1 nationally among baccalaureate institutions with students who participate in mid-length study abroad programs, according to Open Doors 2010, the annual report on international education published by the Institute of International Education (IIE). The report was released Monday, Nov. 15.

The two schools had 398 students study abroad in mid-length programs during the 2008-09 school year, according to the most recent data released by the IIE. The IIE defines mid-length duration study abroad programs as those lasting one semester, one quarter or two quarters (CSB and SJU operate under the semester system). CSB and SJU were No. 2 in this category in the 2009 report.

The 2010 report also found that CSB and SJU ranked No. 5 nationally among baccalaureate institutions for total number of study abroad students, with 550 students who studied abroad in 2008-09. Saint Benedict and Saint John's have been among the top six nationally in the number of students participating in international study abroad programs for the past six years, according to the IIE.

"We are very pleased to see the ongoing commitment to education abroad at CSB and SJU and the high level of participation among our students, despite the recent economic challenges," said Peggy Retka, director of the Office for Education Abroad at CSB and SJU. "The value of a semester studying in another country through CSB and SJU's signature programs remains high for graduates and employers alike. The intercultural skills learned will serve CSB and SJU students well in their personal and professional careers."

"Our international students are an integral part of our student bodies, enriching all classes and extracurricular activities with their world vision, culture, talents and academic excellence," said Roger Young, director of international admission at CSB and SJU. "Many of our international students also take advantage of our diverse study abroad programs furthering their world perspective and adding that element to their personal portfolio. To include students from many different religious backgrounds at our Catholic Benedictine colleges complements our values of ecumenism and opens student minds to better understand their own spiritual lives and their place in the world."

The total number of international students studying at colleges and universities in the U.S. increased by 3 percent to an all-time high of 690,923 students in 2009-10. This growth was primarily driven by a 30 percent increase in Chinese student enrollment in the U.S. to a total of nearly 128,000 students.

CSB and SJU offer 17 semester-long study abroad programs in 14 countries on six continents, including the inaugural program to Kolkata, India, this spring. Most of the programs are almost exclusively led by CSB and SJU faculty members, which is very unusual among baccalaureate institutions. In addition, CSB and SJU mount dozens of short-term and service learning overseas trips.

For the complete report, see www.iie.org/opendoors.