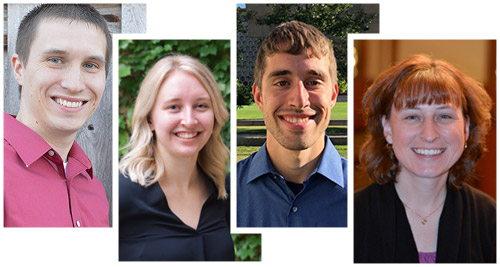 If you’ve ever visited the nursing simulation lab on the fourth floor of the Main Building at the College of Saint Benedict, you know what an amazing place it is.

Still, the lab was missing one item – a functional barcode medication administration system, which nurses use to administer medication to patients in hospitals.

“This was really just one piece we were missing,” said Jodi Berndt, CSB/SJU associate professor of nursing. “It’s going to be a really important piece of our sim lab.”

“This is the first time I developed software that will be used by a large amount of people,” said SJU senior Andrew Rothstein. “It was great to be able to help out students in another field while gaining more skills in my field. And, it is gratifying to think about the possibility of this being used for many years to come.”

“When we first started, Jodi (Berndt) did a good job explaining the need for this product,” said CSB senior Lindsey Hoeschen. “I think the alternatives to making this system were either really expensive or not up to date with what the hospitals do, so I felt like we were contributing to an important additional piece to their high tech simulation lab.”

So, how did this unusual collaboration come about between two departments that don’t normally have a lot in common?

The nursing department determined that a barcode medication administration system was badly needed in the nursing simulation lab. The department started investigating the cost of the software, and determined it was prohibitive.

“Rachelle Larsen, our previous department chair, had suggested why don’t we talk to computer science and see what we can do, if we could create something that would work,” Berndt said.

That led to an email between her, Ohmann and Imad Rahal, professor of computer science at CSB and SJU and chair of the department.

“They said, ‘Hey, we have this idea, but we would need some computing expertise to actually build a system to do it,’ ” Ohmann said. “And, we were really excited. It’s always intriguing to do collaborative work with other departments.”

The faculty members received applications from 15 students, “which was a really positive thing,” Ohmann said. “The number of students within the department who are interested in this sort of thing is just enormous.”

That led to the hiring of two computer science majors – Hoeschen, from Sartell, Minnesota, and Rothstein, from Cold Spring, Minnesota – who worked remotely on the project throughout the summer.

“I thought it would be a great thing to do as my other plans fell through,” said Hoeschen, who had an internship canceled at the end of March because of the COVID-19 pandemic. “I thought the collaboration between the departments was cool because it is not one you’d think of right away.”

Then, the summer was divided into two-week sprints.

“At the beginning of each sprint we set tasks for that sprint, and at the end we reflected on (how) that sprint went and prepare for the next sprint,” Rothstein said. “After each task was completed, Jodi reviewed it to determine if it could be considered ‘done,’ or if it needed fixes. This process was a great learning experience for us because it is very similar to what is used in the software development industry.”

They completed the bulk of their work in mid-August, and the software will be used full-time starting the second block of fall semester.

“I am happy with the final product,” Hoeschen said. “In the beginning, it was kind of hard to picture what this would look like in the end because we did not have a lot to go off and Andy and I were starting from scratch.

“I'm excited to see the finished product in use in the classroom and I'm hoping to go up to their simulation lab sometime this year and see how it helps the nursing students. As a team, we really made the entire thing from understanding the functional needs to designing and developing the system to getting it on some type of server so it can be widely used throughout campus,” Hoeschen added.

“I am very pleased with how the project turned out,” Rothstein said. “As with anything, there are aspects that could work a little better, but it feels good to look back and see how much we accomplished this summer. Especially remembering the days where it felt like we were making very little progress, it is great to see that it all came together.”

Berndt marvels that she never set foot in the same room as Hoeschen or Rothstein while working on this project, yet she “couldn’t be happier with the product they created.

“I think it’s actually a positive thing that happened during kind of a dark time,” Berndt said. “When everything else got canceled and many research opportunities fell apart, this was really a positive thing. And, every nursing student is going to benefit from this."