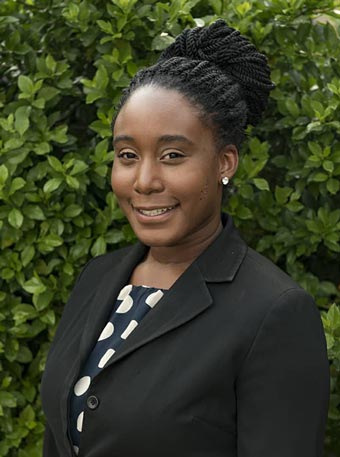 Niesha Ford found her calling and joined the Peace Corps following her graduation in 2017 from the College of Saint Benedict.

Ford is one of 10 people to receive a Donald M. Payne International Development Graduate Fellowship for 2019.

The Payne Fellowship provides up to $96,000 over two years for graduate school, internships and professional development activities. At the conclusion of the two years, the Payne Fellow will begin a career in foreign service with the U.S. Agency for International Development (USAID).

“I don’t know if you believe in a calling, but I felt like this was my call to serve again, but this time as a career,” Ford said.

Following her passion for service and public health, Ford – a native of Hayward, California - joined the Peace Corps and worked in Rwanda as a maternal and child health volunteer after majoring in biochemistry at CSB.

“I focused on three main projects during my service – water, hygiene and sanitation; nutrition; and malaria,” Ford said. “My community and I built latrines for 50 families, distributed 50 pigs, food and seeds to 50 families and did various education sessions regarding malaria, hand and food hygiene and malnutrition.”

During her stay in the African country, a fellow Peace Corps volunteer suggested Ford look into a Payne Fellowship.

“I decided to apply because I really enjoyed the work I was doing in the Peace Corps,” Ford said. “Although I knew that being a foreign service officer would be different from my Peace Corps work, I was ready to make my impact bigger and adopt a life abroad as my new lifestyle.

“My mind started to become solidified on the notion that international development was the career I wanted to be in, where I could make the biggest impact and do what I am really passionate about.”

Ford believes that her time at CSB laid the foundation for her curiosities regarding global health and international development. She spent a summer between her first and second years of college volunteering at a free clinic, and co-led 30 students on a service trip to Peru her senior year. She was a Mayo Clinic Innovation Scholar in 2016, and completed internships with Kaiser Permanente, Mayo Clinic and CentraCare Health.

Ford begins graduate school Aug. 21 at the Tulane University School of Public Health and Tropical Medicine. After she completes graduate school, she will be sworn in as a foreign service officer with USAID.

“Just like the Peace Corps, I am flexible about where I get placed,” Ford said. “I’ve come to find that every country has hidden gems waiting to be discovered.

“However, a country in West Africa is an area I hope to be placed in on my first tour,” Ford said.

But no matter where Ford ends up, her story really began at CSB.

“The emphasis and exposure to service at CSB was really helpful in gaining experience in teamwork and soft skills, two things which are emphasized just as much as hard skills in this type of work,” Ford said. “The community and support I received at CSB has opened many doors for me.”