Father Patrick Neary, C.S.C. has been appointed the next bishop of the Diocese of Saint Cloud, it was announced on Thursday, Dec 15.

The announcement was made in Washington D.C. by Archbishop Christophe Pierre, apostolic nuncio to the United States. A release from the diocese said Neary’s episcopal ordination and installation as bishop will take place on Tuesday, Feb. 14. Vespers will take place on Monday, Feb. 13.

Neary becomes the 10th bishop of the diocese. He succeeds Bishop Donald J. Kettler ’66 (SOT ’70), , who has served as bishop since 2013. He will serve as apostolic administrator until Bishop-elect Neary’s installation.

“I felt overwhelmed to say the least at being asked to be the bishop here,” Neary said at a press conference Thursday morning. “I never expected this invitation. This call from the Holy Father … from the church.

“I said yes, just trusting in the Lord.”

Neary was born on March 6, 1963 in La Porte, Indiana -- the first of five children and an only son. He graduated from La Porte High School in 1981 and entered the undergraduate seminary with the Congregation of Holy Cross at the University of Notre Dame. While there, he spent a semester at Anahuac University in Mexico City, where he learned Spanish.

The release from the diocese said that after graduating from Notre Dame in 1985, he completed a novice year in Cascade, Colorado, before beginning his M.Div. studies in 1986 at the Jesuit School of Theology in Berkeley, California. He professed his vows with Congregation of Holy Cross on Sept. 1, 1990, and was ordained a priest at the Basilica of the Sacred Heart at Notre Dame on April 1, 1991.

In 1994, he was assigned to the University of Notre Dame, where he worked in the Office of Campus Ministry -- ministering to Latino students and serving as R.O.T.C. chaplain. He was appointed assistant rector at Moreau Seminary at Notre Dame in 2000, then was named to a six-year term as rector in 2004. He served on the Provincial Council of the U.S. Province of Priests and Brothers from 2003-2010 and on the Vocation and Formation Commission of the General Administration for the Congregation of Holy Cross in Rome from 2002-2010.

After completing his term as rector, Neary was asked to run the congregation’s seminary in Nairobi, Kenya, for two years. He began his service in 2010 before being elected district supervisor of Holy Cross in East Africa the following year. He served two three-year terms in that post, based out of the district headquarters in Uganda.

Since July 2018, he has served as pastor of Holy Redeemer Parish in Portland, Oregon.

“Father Neary is tremendously qualified with his experiences as a pastor, seminary rector, formation director and missioner,” Kettler said of his successor. “I am very appreciative that he said ‘yes’ to the call to serve the people of this diocese as their bishop, and I welcome him warmly to Central Minnesota.”

The Diocese of St. Cloud includes 131 parishes spread across 16 counties in Central Minnesota and includes a Catholic population of around 125,000 people.

“Starting out, my No. 1 priority will be getting to know all the priests of the diocese and all the deacons,” Neary said. “To really get to know their stories and to visit the parishes. I don’t know how I’m going to schedule all this, but I want to get out to all the parishes as soon as I’m able to.”

Neary also praised the Catholic educational opportunities within the diocese, including the College of Saint Benedict, Saint John’s University and the Saint John’s School of Theology and Seminary.

“This diocese is blessed with 27 elementary schools, two high schools, Saint John’s University, the College of Saint Benedict and Saint John’s School of Theology,” he said. “What a gift to have all these schools in one diocese. It’s just tremendous.”

Brian Bruess, the president of CSB and SJU, asked the two campuses to extend their welcome and prayers to the Bishop-elect.

“Let us pray together for our Bishop-elect and for the Diocese,” Bruess said in a message to the campus communities. “May God bless him greatly with strength, wisdom, patience and peace as he shepherds and strengthens his new flock.” 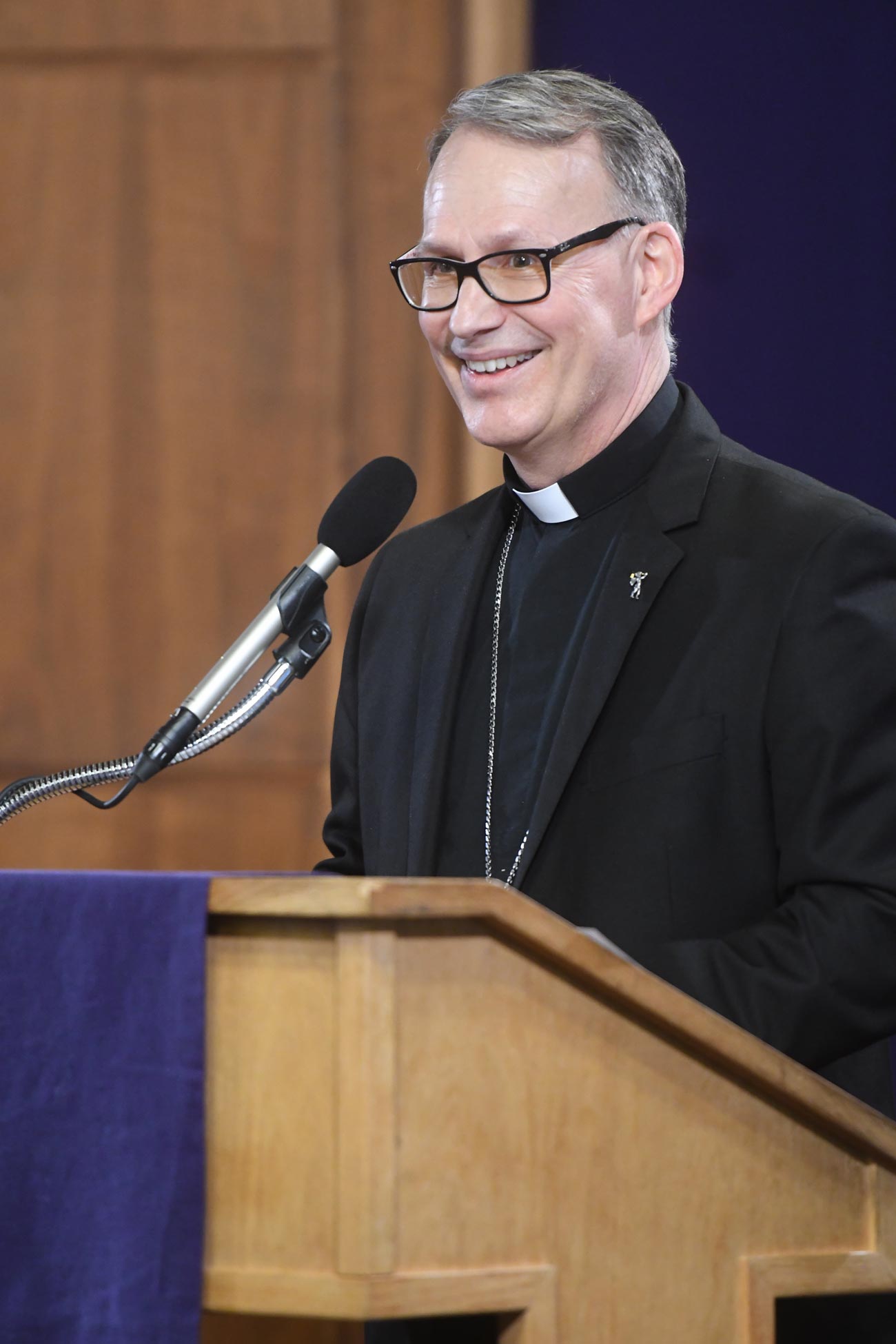