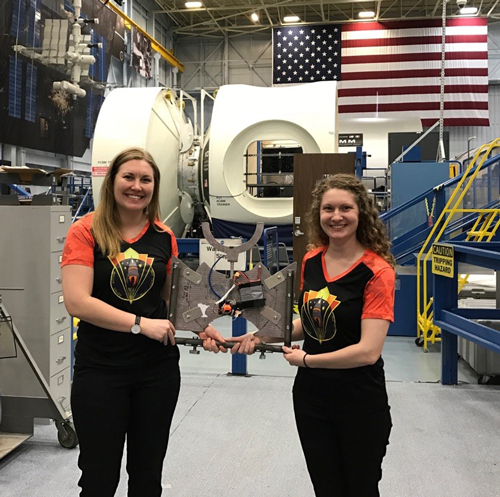 Kara Ehlert (left) and Emily Dauk hold the experimental device they helped test during their visit to NASA's Johnson Space in Houston.

Kara Ehlert and Emily Dauk both love teaching mathematics. Sometimes, though, math is a tough sell to their high school students.

But add spaceflight and a trip to Mars to the mix, and the students perk up to the 2011 College of Saint Benedict graduates.

Hey, maybe math isn’t so bad after all.

Ehlert, who teaches at St. Thomas Academy in Mendota Heights, Minnesota, and Dauk, who teaches at Mankato (Minnesota) East High School, were part of a team that recently tested a student designed satellite launching experimental device at NASA’s Johnson Space Center in Houston.

“I sit here (in class) and say math is beautiful, and they laugh at me because I do play it up a little bit, because I love math,” Ehlert said. “But now, to be able to give my students opportunities of where I’ve seen (math) used and say, ‘You could be engineering a robot for NASA.’ “

“It (going to Mars) is a goal that people are working on,” Dauk said. “It’s a goal that realistically could happen in the next 20 years. Being able to put some math in that context is such an exciting way to look at it.”

Each team received a box of material from NASA to use in the experiment, and had about three months to design the device. Each team’s faculty leaders were then invited in April to Houston to test the devices.

“They (the students) were all a little disappointed that it was the teachers that got to go to NASA, and not them,” Ehlert said.

They were able to test their device on the Precision Air-Bearing Floor (think of an air hockey table) in the Space Vehicle Mockup Facility at the space center. The floor has a smooth metal surface that allows large objects to be moved as they might in space by way of tiny floor facing air jets.

After replacing a spring that didn’t produce enough force to launch the disk at five meters per second, the team had the most successful launches that hit the moving target. Keep in mind that astronauts were training for future spaceflights not far away.

Watch a video of the experiment

Dauk was able to try three training simulators. She maneuvered the robotic arm on the International Space Station (ISS) used to capture the SpaceX resupply capsule, and docked the Orion spacecraft to the ISS. Finally, she got to drive the Multi-Mission Space Exploration Vehicle (MMSEV) that humans will eventually use to explore Mars.

“The simulators that we were able to try out were by far the highlight of the trip,” Dauk said. They were extremely realistic, she added, including the sound of thrusters firing in the docking simulator and the use of the actual Martian topography in the MMSEV simulator.

Both Ehlert and Dauk spoke to astronaut Ricky Arnold. They did not see Saint John’s University graduate Mark Vande Hei ‘89, who is training for a September mission to the ISS.

“We got to do some of these authentic experiences that not even employees of NASA get to do,” said Ehlert, who got to ride in the Modular Robotic Vehicle. She also visited a commercial space company in Houston.

But in the end, both Ehlert and Dauk brought back much information they can use in the classroom.

“For me, this opportunity opened my eyes to other opportunities that are out there for me as a teacher,” Ehlert said. “I didn’t know programs like this existed until I was able to go and experience it, and get some training that was outside of the classroom which was real world.

“For me, it was being able to see – and I tell my students this all the time – the jobs that they are going to have (in the future) aren’t necessarily jobs right now. They don’t exist,” Ehlert said.

“One thing I am always on the search for is real-world applications for algebra and high school math,” Dauk said. “NASA has a lot of those resources ready-made for educators to use. I didn’t realize those resources were out there. That’s a huge, huge open door for us to use.”

Did her brush with Mars and NASA make Dauk want to trade her algebra book for a spacesuit?

“Not a chance,” she said, laughing.