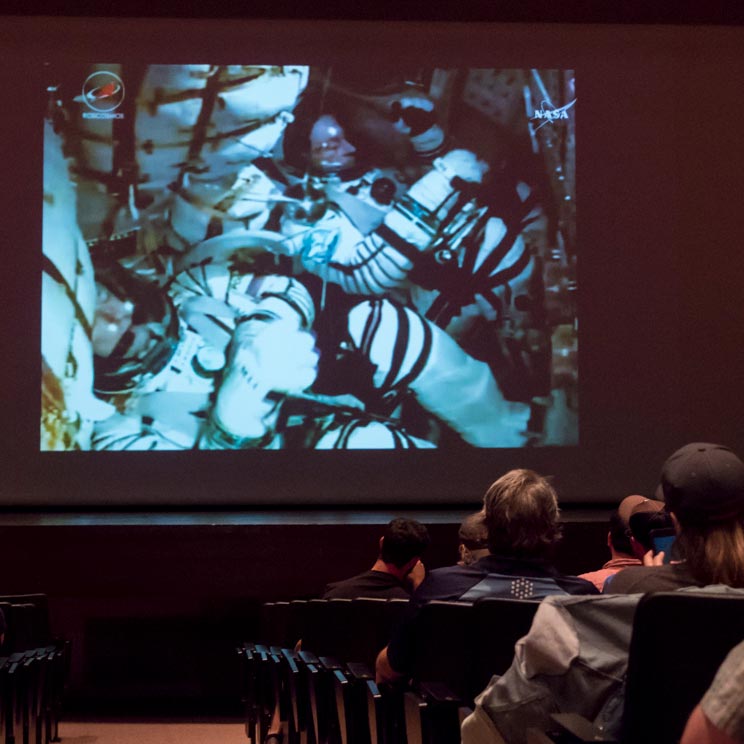 The countdown to liftoff was inside two minutes when NASA astronaut Mark Vande Hei ’89 reached out from his seat inside the cramped Soyuz MS-06 spacecraft and extended his right hand.

From the adjoining two seats, Russian cosmonaut Alexander Misurkin and NASA astronaut Joe Acaba did the same, stacking their space-suited hands together in a display of community and camaraderie.

NASA TV captured their special moment, one that for Vande Hei had its roots at Saint John’s University and was three decades in the making.

And back on Vande Hei’s home campus, spectators to Tuesday’s launch also relished the moment.

“I think he planned on becoming a general,” added SJU physics and astronomy associate professor Thomas Kirkman, who was one of Vande Hei’s instructors during his years (1985-89) at Saint John’s. “It turns out he’s an astronaut instead.”

Pellegrene rang with applause from the assembled spectators when the Soyuz blasted off at 4:17 p.m. Tuesday (3:17 a.m. Wednesday in Kazakhstan where the launch took place) in what NASA termed a “textbook” launch.

“Leaving for dinner. Goodbye normal bed for half a year,” Vande Hei said in his final Twitter post before the launch. He plans to post regular Tweets from the ISS at @astro_sabot.

The mission is the culmination of a lifetime of work for Vande Hei, 50, a Benilde-St. Margaret’s High School graduate whose parents live in Chanhassen, Minnesota.

He was an outstanding ROTC and physics student at Saint John’s, where his relentless focus was on a military career.

“I’ll walk through the ROTC hallway, and there’s a picture of him down there – the signature is ‘astronaut,’” said Nelson, who like Vande Hei is also an outstanding ROTC student. “In the physics department, he also has his name down there as well.

“Just walking around the halls through my college experience, he’s been the guy that’s been someone to look up to.”

And now, Vande Hei is the first Johnnie in space.

“It’s surprising how much he looks like the kid that was here all these years ago,” said SJU physics professor Dean Langley, another of Vande Hei’s former instructors. “Just a little fancier haircut.”

“It probably feels really good for him,” said Thwaites, who plans to go into space research in graduate school. “It takes so much work to get to where he is now.”

Vande Hei is scheduled for a Jan. 29, 2018, NASA Inflight Education Downlink session from space with CSB/SJU students – and prospective students.

“A school this size has somebody joining the ranks (of astronauts)?” Nelson said. “That’s definitely a good reflection of this university.”

Vande Hei is scheduled to return to Earth Feb. 18. He is also scheduled to be the May speaker for Saint John’s ROTC commissioning ceremony, something Nelson helped organize.

Between now and then, Vande Hei serves as an inspiration.

“I don’t think that’s an overstatement,” Thwaites said. “I think we see a lot of people from Saint John’s/Saint Ben’s who go and do amazing things.”

But on Tuesday, the first Johnnie astronaut was just relishing the moment. His pre-recorded launch interview video said exactly as much.

“My name is Mark Vande Hei,” he said, beaming, “and I am a NASA astronaut.”