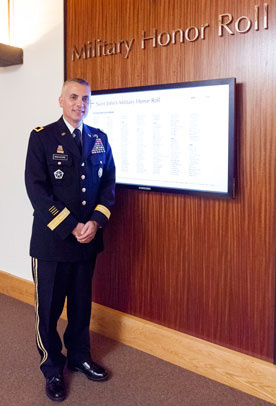 Nakasone will also head the U.S. Cyber Command, the Defense Department’s digital warfighting outfit. The two groups have shared a leader since the Pentagon launched Cyber Command in 2009.

The nomination was released in a tweet by Rob Joyce, special assistant to the President and cybersecurity coordinator, National Security Council, and also reported by Politico.

“An exceptional leader for two exceptional organizations, he brings great experience and (a) strong cyber background,” Joyce wrote in his tweet.

Politico reported that it was “unclear” when the Senate Armed Services Committee will take up Nakasone’s nomination.

Nakasone has held command and staff positions across all levels of the Army with assignments in the U.S., the Republic of Korea, Iraq and Afghanistan. He currenty is chief of Army Cyber Command, a post he has held since 2016. In that role, he also directed Joint Task Force Ares, a special unit that develops digital weapons to attack and disrupt the Islamic State’s online operations, Politico reported.

Nakasone was a 1986 graduate of SJU with a degree in economics. Nakasone received his commission in the Army through the ROTC program.

“SJU and CSB provided me with an idea or framework for thinking,” Nakasone said in a CSB/SJU online story posted in 2015, when he visited SJU for the unveiling of the Military Honor Roll. “Life isn’t made up of multiple choice questions and answers. It’s really made up of being able to look at a lot of data, examine it and make creative solutions from it.

“Secondly (attending CSB and SJU) gave me a rich feeling of my faith, in terms of who I was and a sense of compassion. Thirdly, it gave me a tremendous amount of friends. My closest friends are from the Class of 1986 and 1985 of Saint John’s University.”

Nakasone has twice worked as a staff officer to the Joint Staffs of Staff. He has received the Distinguished Service Medal, the Defense Superior Service Medal, the Legion of Merit and the Bronze Star, among other awards and decorations.