The new Multicultural Center at the College of Saint Benedict demonstrates the power that students can have.

“This is a monumental moment in the sense that the voices of the students are finally being heard – although we’re going to acknowledge that more work needs to be done,” said CSB student Godgift Iteghete.

“We do have to acknowledge this, as well as this being an important step forward,” she added.

The Multicultural Center made its debut with a pair of openings Sept. 23-24. A celebration was held Sept. 23 with members of the CSB and Saint John’s University Board of Trustees in attendance, with a student opening on Sept. 24.

While the Multicultural Center – located in Murray Hall – is open to anyone, it is designed to be a home for historically underrepresented students on each campus.

“This started as a conversation between students and the presidents and vice presidents early last year,” CSB Transitional President Laurie Hamen said. “The idea really came from the students, and they helped us execute on it. They asked, and we had to work to get to where they wanted to go.”

“I think this is representative of the best of what a Catholic, Benedictine community can be – listening, hearing, responding and responding in a way that acts to support human dignity, inclusion and community,” SJU Transitional President James Mullen said. “There was great energy behind (the Center), and great passion to see it done, and some really talented people put it together.”

But that all started with students raising their voices for a Multicultural Center.

“It came from a lot of different efforts, a lot of different wants and needs to conceptualize this to make this a reality and to make sure students when they arrive here – especially when they’re underrepresented about their lives – it is somewhere that they can come to with resources, whether it be the Q+ community or whatever else they resonate with. It’s all in here,” she said.

Malik Stewart, director of Multicultural Student Services at CSB and SJU, agreed that the student voice was heard.

“But I also think it takes leadership. Although both Jim and Laurie have transitional in their titles, this (Center) is as much to do with their leadership as with anything. That was really important,” Stewart said.

The informal reviews of the Multicultural Center spotlighted two elements.

“I think it’s really bright. I think the mix of colors do it justice,” Iteghete said. “Then also, it’s wide enough where you can have a wide variety of events in here and feel welcome.”

The walls of the Multicultural Center are adorned with photos spotlighting students of color, international students and the LGBTQ communities at CSB and SJU.

“When you look at the walls of the pictures of the students, underrepresented students should be able to walk in here and see themselves, Bennies and Johnnies, represented physically throughout the space,” Stewart said. “That, I think, will help those students in particular feel more at home because it’s really important to see yourself.”

“It’s beautiful, it’s inviting, it’s comfortable,” Mullen said. “The spaces work so well together and are so inclusive in how they are presented.”

There’s additional space in the basement of Murray Hall including a Lavender Lounge and an interfaith prayer room. In addition, the front patio of the Multicultural Center is expected to be completed shortly.

Hamen complimented several people regarding the development of the Multicultural Center, including Stewart and Vice Presidents of Student Development Mary Geller (CSB) and Mike Connolly (SJU).

Still, it all comes back to the student experience.

“It’s definitely a step in the right direction. It creates a space for the conversations that need to be had,” Iteghete said. “It also gets some people into the room, those people that need to listen to those voices, to get into the room and actually do that listening.”

“I think students have been pleasantly surprised by what they see,” Stewart said. “I hope everybody comes back soon.” 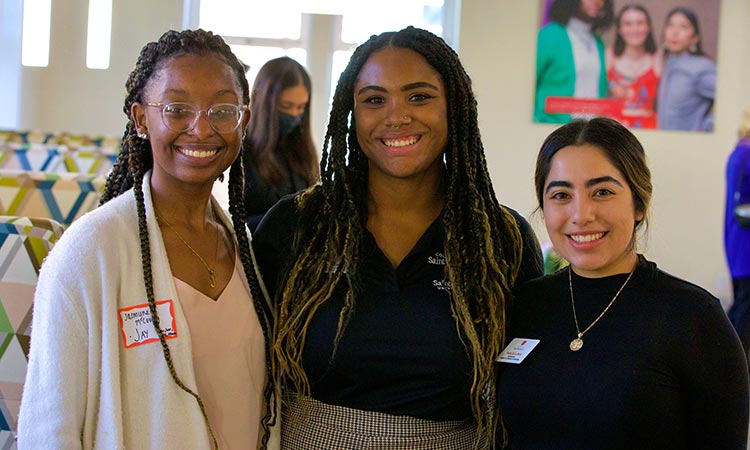 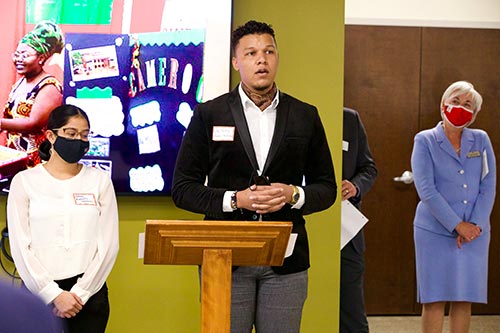 (From left) Bethy Ramirez-Sanchez ’22 and Joe Perry ’22 gave remarks at the event.