Rachel Mullin had a game plan while a student at the College of Saint Benedict. She wanted to be a Truman Scholar as a junior, and earn a Fulbright English Teaching Assistant Award as a senior.

But a Rhodes Scholar? "It was something that I hadn't considered very much," said Mullin, a 2014 graduate of CSB. 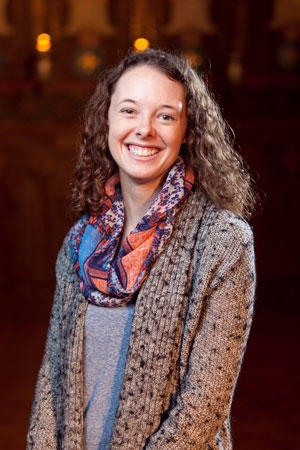 Mullin came to change her mind after realizing the Rhodes Scholarship would help her accomplish her dreams of working with refugees from around the world.

Her effort paid off when Mullin was named a 2016 Rhodes Scholar on Saturday, Nov. 21. She was one of two students selected at the District 13 competition representing seven states in Salt Lake City.

Mullin was the only 2016 Rhodes Scholar from a Minnesota college or university. She also was the only person selected from South Dakota.

Each year, 32 Americans are among more than 80 Rhodes Scholars worldwide who take up degree courses at Oxford University. The first American Rhodes Scholars entered Oxford in 1904, and scholars typically receive a two-year scholarship.

Mullin is the second CSB graduate to receive the award. Laura McGrane, a 1991 graduate of CSB, earned a Rhodes Scholarship in 1992.

"It (the award) means that I can pursue the studies that I think are really important to the world today," Mullin said. "There are two master degrees that I'll pursue. My first master's will be in refugees and forced migration studies, and that's a one-year masters. Then, the second year, I will do international diplomacy and global governance, and that's also a one-year master's."

Saturday's award capped a whirlwind period for Mullin, a native of Humboldt, South Dakota, who graduated from CSB with degrees in history and political science.

In between graduation and leaving for Malaysia to serve her Fulbright Award, she worked at Teaching for Change in Washington, D.C. That taught her to understand aspects of community organizing and education policy. "It made me more excited about the potential of working in D.C. in the future," Mullin said.

In late September, she was crafting her Rhodes application.

"I was trying to do my application, submit everything and talk to Phil (Kronebusch, professor of political science and coordinator of competitive fellowships at CSB and SJU) without having Internet at my house (in Malaysia)," Mullin said. "My very last day of classes in Malaysia, I went to bed and woke up seeing I was a Rhodes finalist."

Upon her return to the United States, she conducted practice interviews at CSB and SJU with Kronebusch, and "living in the library" at Augustana University in Sioux Falls, South Dakota, where her dad teaches history (the university is about 25 miles from her home town). She brushed up on current events, "big thinkers in the field of refugee studies and political science," different theories and how policies are impacting those issues.

Mullin said she has been aided greatly by Kronebusch; Nick Hayes, the University Chair of Critical Thinking at SJU; and Christi Siver, assistant professor of political science at CSB and SJU. Hayes and Siver both served as her advisers in history and political science, respectively.

"I wouldn't be where I was without the three of them," Mullin said. "They'll all deny it, but it's 100 percent true.

"Dr. Hayes was my first-year seminar professor and the person who introduced me to Saint Ben's and Saint John's, and all the resources available to me," Mullin said. "He had a great quote my freshman year: 'Never apologize for your brilliance.' I think I took that to heart. I think I've always been intelligent, but it was at Saint Ben's and Saint John's that I found a niche for that.

"Dr. Siver and I both came to CSB/SJU at the same time, and she was with me every step of the way as I was finding my place at CSB while she was as well. She's written at least a dozen letters of recommendation for me and continues to deal with me when I show up at her office saying, 'Help, I'm struggling to figure out my life,' " Mullin said. "Over the years, she has become as much a friend as a professor."

Kronebusch has helped Mullin apply and prepare for all three awards.

"He's so dedicated to this," Mullin said. "Anytime you talk to him, if you have a question that he can't answer, he's contacting other competitive fellows and he's going to conferences about it. He does his homework."

With the selections Nov. 21, 3,388 Americans have won Rhodes Scholarships, representing 318 colleges and universities.

What others are saying:

"Part of the mission at the College of Saint Benedict is to educate students who have a passion for service so that the education that we provide them is then used to empower and lift up others. Rachel is a shining example of our college's mission. Rachel has the intellectual, diplomacy and leadership talents, the level of interest and the energy needed to take full advantage of a Rhodes Scholarship. The College of Saint Benedict does not endorse a Rhodes applicant every year, but Rachel is precisely the extraordinary applicant who deserves my most enthusiastic recommendation, as well as endorsement."
Mary Dana Hinton, president of CSB, in her nominating letter for Rachel Mullin

"Rachel Mullin embodies our highest aspirations for students at the College of Saint Benedict and Saint John's University. Her achievement embraces not only superlative academic work but also a commitment to community and global service and an intellectual curiosity that restlessly pushes her horizons literally across the globe."
Nicholas Hayes, professor of history and University Chair in Critical Thinking, serving CSB and SJU

"Rachel is the kind of student that might have succeeded elsewhere - she is incredibly bright and well spoken. However, the experiences she was able to have at CSB/SJU, from her study abroad in China to her internship in Bosnia to her experiences in India and Thailand with Extending the Link, helped give her a global perspective and empathy that bridges her academic interests and her passion for human rights. She really is the total package and there is no limit to what she can achieve."
Christi Siver, assistant professor of political science, CSB and SJU