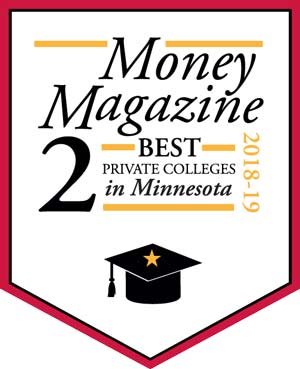 Saint John’s University and the College of Saint Benedict were the top-ranked private colleges in Minnesota, and ranked second and third, respectively, among all colleges in the state by Money Magazine’s Best Colleges of 2018-19.

SJU was ranked No. 80 and CSB No. 92 (tied with Cornell College) in the national rankings. Only the University of Minnesota-Twin Cities was ranked higher among state colleges, at No. 77.

A total of 727 schools across the United States were ranked by the magazine, which was published Aug. 13. Money analyzed graduation rates, tuition charges, family borrowing and alumni earnings (plus 22 other data points) to find the country’s top values.

Among colleges in a seven-state region that included Minnesota, Iowa, Missouri, North Dakota, South Dakota, Nebraska and Kansas, SJU was ranked No. 2 and CSB No. 4. Iowa State University claimed the No. 3 spot.

“The 79 percent graduation rate at Saint John's is slightly higher than peer institutions,” Money reported. “Recent graduates pull in a median income of $54,700, a figure 7 percent greater than that of colleges with comparable student populations.”

“About 84 percent of women at Saint Benedict graduate within six years, 11 percent higher than similar schools,” the magazine reported.

The magazine also had CSB and SJU ranked in several other specialty categories:

“The top of Money’s rankings is crowded with large campuses, because our analysis favors schools that benefit large numbers of students from disadvantaged backgrounds — something large colleges simply have more seats to do. But for students looking for a more intimate academic experience, these are the highest-ranking colleges with fewer than 5,000 students,” the magazine wrote.

“Are the elite colleges a long shot? Whether you’re a B or even C student hoping for a great education, or a stronger student in search of a safety school, these top colleges that accept at least 51 percent of applicants are worth a close look,” the magazine wrote.

“It’s not surprising that elite schools report high graduation rates or alumni success,” Money wrote of this category. “What’s impressive is when a college helps students do far better than would be expected from their academic and economic backgrounds. We call this a college’s value add. For this list, we ranked colleges based on our exclusive value-added scores for graduation rates, earnings and student loan repayment, eliminating schools with any negative scores or a graduation rate below 50 percent.”