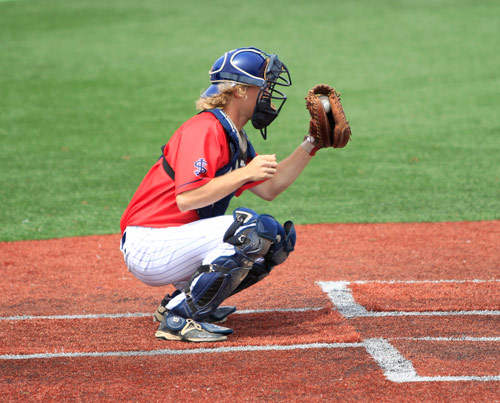 When students enter the College of Saint Benedict and Saint John’s University, they often describe their experience as slow. Then in the blink of an eye, students realize the swiftness of a four-year liberal arts education when they become involved in the community.

Alumnus Mike Reilly ’19 completely understands how fast time can go when you become an active member in a community. Originally from California, Reilly moved to Minnesota to study English at Saint John’s University. Upon arrival, things may have started off slowly for him, but once he became an RA, a student worker for the English Department and joined the Johnnies’ baseball team, his college experience became a different ball game.

Reilly had no idea this type of structure would follow him after graduation. In late July, he arrived in Tororo, Uganda, for his one year of service through the  Benedictine Volunteer Corps (BVC) with Christ the King Monastery.

His experience in Uganda started off like starting his college career: slow.

“The beginning was rough. It was a culture shock, no work and full of boredom, but it forced me to be proactive and ask our site director for a plot in the farm gardens and  now we have a nice garden of green peppers, cabbages and a local veggie called ‘Gobe,’ ” Reilly said. Growing green peppers, cabbages and Gobe was just the starting point for everything Reilly and his partner would grow while in Uganda.

A few months later, Reilly used his skills and knowledge to begin planting seeds at the Benedictine Eye Hospital, where he was initially assigned to assist the human resource (HR) manager scan and upload employee files to the Ministry of Health data base. Planting this seed led to him planting event more seeds in the hospital, keeping him and John Miles, his BVC partner, busy while making time go by much faster in the process.

“After my stint in the hospital, the HR manager sat us down and asked us if we could design a computer education course for the hospital’s employees," Reilly said.  The course is divided into three sections: beginner, immediate and specialized.

The beginner course is for those who have no experience with computers while the immediate and specialized sections focus on those with little and lots of computer experience. The course launched in January. Reilly’s goal is to make sure everyone in the course absorbs as much information as possible, so they can be self-sufficient with using the computers and websites.

“I am trying my best not to answer every question they have and let them figure things out for themselves because I won’t be here forever,” Reilly said.

In addition to teaching this course, Reilly is also teaching Adobe Premiere to the HR manager and anesthesiologist of the hospital. After helping the employees develop their computer skills, Reilly was asked to teach English and computer education at the vocational school run by the monastery to 50 kids.

While Reilly has little time on his hands, he does not let this get in the way of traveling. He recently traveled to Nairobi to renew his visa where he had the opportunity to meet up with SJU alum James Kimeu ‘09 who now works at a university in Nairobi, and his wife Ashley Kimeu ’09, who is a CSB alum.

During his time in Nairobi, Reilly also visited other members of the Christ the King Monastery, who attend universities there.

With the amount of work and travelling Reilly has done, he realizes once again, time is going by fast which means his time in Uganda will be up in a few months. He is leaving all is options open as he figures out what to do once his time in Uganda does come to an end.

“My plans for next year are uncertain. I am currently considering doing BVC again in Nairobi, coming back to SJU in some capacity, or going to Washington, D.C., to work with my brother,” Reilly said.

Whatever he does decide to do after his time in Uganda will consist of him being an active member of a community, planting seeds within the community to make it better while simultaneously realizing how fast time is going by.