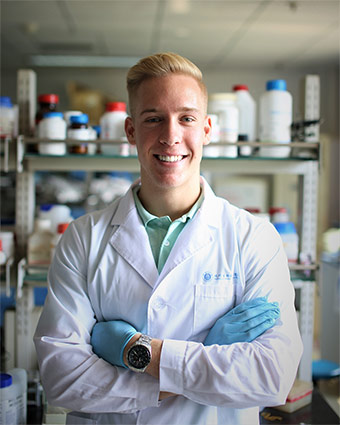 Michael Kelly spent his summer conducting research on neurodegenerative diseases, such as Alzheimer’s and Parkinson’s disease.

But his experience really became a testament to the power of a liberal arts education at the College of Saint Benedict and Saint John’s University.

Kelly, a rising senior at SJU and a graduate of Duluth East High School, completed his internship Aug. 2 at the HealthPartners Neuroscience Center in St. Paul.

“This research was the perfect summer experience, and I would do it all over again,” Kelly said.

But he took an interesting route to do it. Kelly began his collegiate career as a biology and psychology double-major.

“After taking courses, such as Abnormal Psychology and Biochemistry, I became interested in the biology aspects of psychology, and the psychology aspects of biology,” Kelly said. “Neuroscience matches this interest perfectly. Because I’m also pre-med, I’ve taken many chemistry and physics courses, and neuroscience actually condenses many of these core sciences into one discipline.”

“I would say it’s more or less an integrative neuroscience major,” Kelly said. “I won’t have the same lab experiences as other neuroscience majors from schools that offer the major, but I’ll have that liberal arts kind of well-rounded understanding of it.”

That was proven during his internship. Initially, Kelly said other interns and Ph.D.’s working in the lab were hesitant about his background in neuroscience, because he didn’t come from a research-dominate school like the University of Minnesota.

“They soon found out – even after the first day – that I have a unique and valuable perspective on science – a more well-rounded background,” Kelly said. “I’m not just focused in on neuroscience – I’ve also taken classes in English and art, for example.

“I’ve taken all sorts of different (classes) at CSB and SJU which have enabled me to have a different outlook on life and within the sciences. And, I can attack scientific problems in neuroscience with a completely distinct perspective,” Kelly said.

“I think it was a great benefit to our research team that I came from a liberal arts college and have that experience, because many of them don’t.”

Kelly said the research conducted uncovered some interesting findings that could potentially lead to breakthroughs in the treatment of neurodegenerative diseases like Parkinson’s and Alzheimer’s.

“We were attempting to essentially rebuild the brain, because those diseases denature our brain cells,” Kelly said. “The neurons deteriorate in neurodegenerative diseases such as Alzheimer’s and Parkinson’s disease. This is what causes the symptoms of these diseases, such as memory loss and the inability to function normally.

“Our lab was using specifically designed techniques, and our method entailed intranasal delivery of drugs, bypassing the blood-brain barrier and enabling the medications to take effect extremely fast,” Kelly said. “Many drugs can’t get to your brain, because of the body’s natural defenses and barriers, but our drugs can because we go through the nose.”

One of those drugs is insulin, which helps bring glucose to the brain cells.

“When we gave our pre-clinical disease models insulin intranasally, the models’ brain cells were then capable of taking in the extracellular glucose, which results in the growth of brain cells. Using insulin and a combination of other medications helps reconstruct the cells, which is called neurogenesis,” Kelly said.

Because of the number of experiments conducted and the data collected over the summer, It’s likely that Kelly will be a co-author to possibly three papers that will appear down the road in medical journals.

“Being published is a way to say that I was part of the research and I really contributed to this science, and we were actually able to produce results that may be beneficial for future science reference in the future,” Kelly said. “So, it’s a great honor to be published.

Kelly said that CSB and SJU made his individualized major fit exactly how he wanted.

“Because I chose to attend Saint Ben’s and Saint John’s, I was actually able to individualize (the major) for my needs and for what I want in a degree,” Kelly said. “I am lucky to have a lot of attention and care from CSB and SJU because my advisers work through my academic interests one-on-one with me.”

“I think it’s a great selling point that we’re not limited to just to the majors offered. There’s an uncountable number of possibilities and combinations to be had at CSB/SJU. At Saint Ben’s and Saint John’s, there’s a plethora of options for every student to create an individualized major that best fits their desires and hopes in an undergraduate degree,” Kelly said.