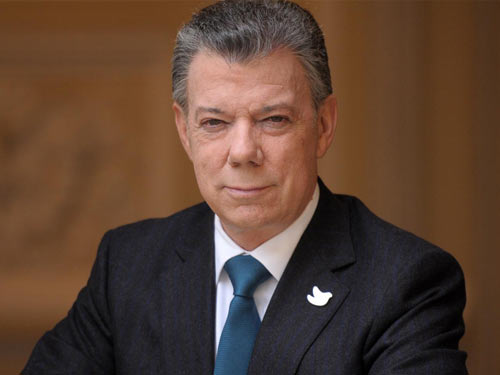 Juan Manuel Santos, former president of Colombia from 2010-18 and winner of the 2016 Nobel Peace Prize, will deliver the 13th annual Eugene J. McCarthy Lecture at 7 p.m. Tuesday, Feb. 4, at the Stephen B. Humphrey Theater at Saint John’s University.

Although the lecture is free and open to the public, tickets are required and are available online or by calling the Fine Arts Programming Box Office at 320-363-5777.

Due to his tenacity and determination to achieve peace and reconciliation in Colombia, the Nobel Committee awarded Santos the honor “for his resolute efforts to bring the country’s more than 50-year-long civil war to an end.”

In January 2017, he was recognized as the Statesman of the Year by the World Economic Forum. Time Magazine also twice recognized Santos among the 100 Most Influential People in the world.

The program will begin with a documentary film, “Port of Destiny,” followed by the lecture and an interview of Santos conducted by Valentín Sierra.

Sierra is a native of Manizales, Colombia, and a 2010 graduate of SJU with majors in economics and political science. He is the forthcoming Secretary of Planning for the Governor of Caldas, Colombia.

Sierra recently earned a master of public policy degree at Harvard Kennedy School of Government and a master’s degree in international economics and finance from the Johns Hopkins School of Advanced International Studies.

The annual McCarthy Lecture carries his deep commitment to the ideals and principles of democratic self-government. It seeks to inspire a new generation of young people to pursue fresh ideas, to challenge the status quo, to effect positive change in their communities and, like McCarthy himself, to lead with honesty, integrity and courage.