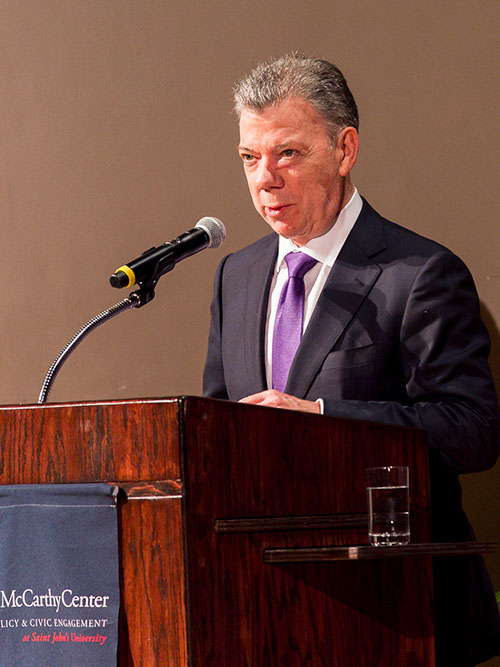 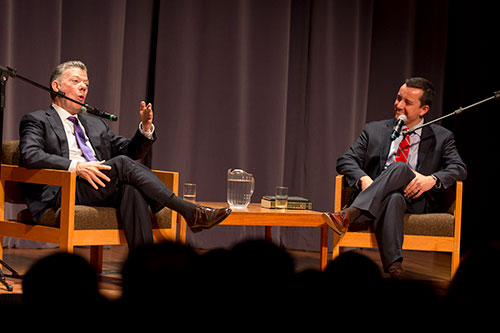 Achieving real change is often a difficult process, and the risk of failure can be high.

But taking those chances is sometimes the only way to make the world around you a better place.

That was the message conveyed by Juan Manuel Santos, the President of Colombia from 2010-18, when he delivered the 13th Annual Eugene J. McCarthy Lecture Tuesday night at the Stephen B. Humphrey Theater at Saint John’s University.

The annual McCarthy Lecture is sponsored by the Eugene J. McCarthy Center for Public Policy and Civic Engagement at SJU.

It is meant to honor the SJU graduate and former Minnesota Senator and presidential candidate’s deep commitment to the ideals and principles of democratic self-government. It seeks to inspire a new generation of young people to pursue fresh ideas, to challenge the status quo, to effect positive change in their communities and, like McCarthy himself, to lead with honesty, integrity and courage.

Which made Santos, who took the lead role in ending a 50-plus year civil war in his nation and won the 2016 Nobel Peace Prize for his efforts, a fitting choice to deliver this year’s lecture.

“Be bold. Be ambitious. If you’re not ambitious and you don’t set your aim high, your progress will not be as high as you would have liked.”

Santos knows of what he speaks. The civil war with the  Revolutionary Armed Forces of Colombia (FARC) stretched more than five decades. Hundreds of thousands of Colombians were killed while millions more were left displaced.

As defense minister, Santos gained popularity by the success he had waging the war against the FARC, whose brutality caused the group to be labeled as a terrorist organization by the U.S. and other countries.

That helped pave the way for his election as president, but it also placed him in a unique position to make peace – even if it took a huge toll on his popularity with many Colombians.

“Peace doesn’t just unintentionally grow,” he said. “You have to construct it. And you make peace with your enemies, not with your friends. That’s important to understand.

The event marked a homecoming for Saint John’s graduate Valentin Sierra ’10, who interviewed Santos on stage following his lecture.

Sierra currently serves as the Secretary of Planning of the Colombian State of Caldas, located in the central part of the country. There, he is the governor’s “manager of public investments and development initiatives.”

He grew up in Colombia in the midst of the conflict with the FARC. And he relished Tuesday’s lecture as a chance to return to his alma matter and show off a different side of his country than many Americans have previously been exposed to.

“This is a historic opportunity for Colombia to be portrayed in a different light at Saint John’s and Saint Benedict,” Sierra said prior to the event. “As a country that is transforming itself into a peaceful, prosperous society. A country that is turning the page of history and overcoming its violent past.

“A country that has found reconciliation and healing.”

Sierra said Santos’ example provides lessons that extend far beyond the borders of Colombia itself.

“The whole world is sort of polarized right now, and the message that President Santos came to deliver is that we can find a third way of conducting the people’s business,” he said. “There is room to find compromise and healing.”