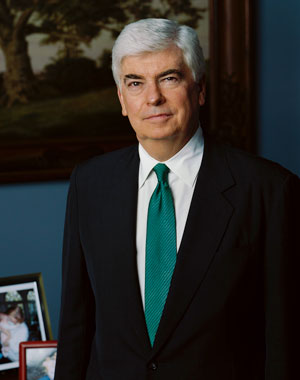 Dodd will be interviewed by Gary Eichten, former host at Minnesota Public Radio. There will also be a question-and-answer session from the audience at the end of the event.

The lecture is free and open to the public, but persons interested in attending must get a ticket in advance. Tickets are available by calling the Benedicta Arts Center ticket office at 320-363-5777.

For 36 years, Dodd represented Connecticut in both houses of Congress (1975-81 in the House of Representatives, and 1981-2011 in the Senate). As the state's longest serving member, he was recognized as one of the most widely respected legislators in Congress, earning the trust of both Republicans and Democrats.

A key participant in nearly every major national policy debate over the last three decades, Dodd is perhaps best known for authoring or co-authoring the Family and Medical Leave Act in 1993; the Patient Protection and Affordable Care Act; the Help America Vote Act; and the Dodd-Frank Wall Street Reform and Consumer Protection Act, crafted in the wake of one of the worst economic downturns in history.

Dodd served as a senior member of the Senate Foreign Relations Committee and is a recognized expert on Latin America. During his tenure, he interacted extensively with leaders throughout Europe, Asia, Canada and Latin America and served as co-chair of the U.S.-India Senate Caucus

Following his graduation from Providence College, Dodd answered John F. Kennedy's call to service and joined the Peace Corps, serving in the Dominican Republic from 1966-68. Upon returning to the United States, Dodd enlisted in the U.S. Army National Guard and Army Reserves. In 1972, he earned a law degree from the Brandeis School of Law at the University of Louisville.

Eichten began his career at MPR as a student announcer at KSJR in Collegeville (MPR's first station), and is a 1969 graduate of SJU. During his 40-year career at MPR, he served as news director, special events producer and station manager. He hosted MPR's "Midday" program for more than 20 years.

The Eugene J. McCarthy Lecture carries McCarthy's deep commitment to the ideals and principles of democratic self-government. It seeks to inspire a new generation of young people to pursue fresh ideas, to challenge the status quo, to affect positive change in their communities and like McCarthy himself, to lead with honesty, integrity and courage.

McCarthy, a native of Watkins, Minnesota, graduated from Saint John's Preparatory School in 1931 and Saint John's University in 1935. He served five terms representing Minnesota in the U.S. House of Representatives (1949-59) and two terms in the U.S. Senate (1959-71). He ran for president several times, most notably in 1968.