A Johnnie in space? 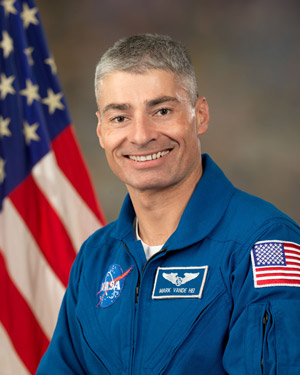 When people talk to Lt. Col. Mark Vande Hei and tell him the U.S. space program has ended, the NASA astronaut and Saint John's University graduate doesn't know whether to laugh - or cry.

"The media is focusing a lot of attention on the idea that the U.S. space program has ended, but that isn't true. It's hard not to laugh - or cry - when I hear that because we have U.S. astronauts in space right now (serving on the International Space Station)," Vande Hei said Jan. 31 during a two-day visit to SJU. "There's a continuous U.S. presence in space.

"I think this is a very dynamic time (for the U.S. space program). Where we end up depends on a lot of factors. The good news is we still have people in space," Vande Hei said.

Someday, Vande Hei hopes to join them. He was one of nine men and women selected in the 2009 astronaut class, and completed his training in June 2011 to qualify for future space assignments.

"I'm pretty confident that I'm going to get the chance to fly to the space station, largely because there's been so much effort already put into getting me ready to do that," Vande Hei said. "That's why I was hired. It's not a good investment if they hire folks like me and don't get us up on the space station. So, I fully expect to do that.

"Certainly, as an astronaut, I know I have a job that I could do in space tomorrow, if they were willing to launch me," Vande Hei said.

His education at Saint John's and the College of Saint Benedict helped launch Vande Hei to his career at NASA. Vande Hei was born in Falls Church, Va., and after living in Japan, Wisconsin, Massachusetts and New Jersey, his family moved to the Twin Cities when he was a sophomore in high school. He graduated from Benilde-St. Margaret's High School in St. Louis Park.

He considered attending Notre Dame, but decided on Saint John's because "a lot of people who I went to high school with were going there, too," Vande Hei said.

"Because I had transferred in the middle of high school, I really felt like I had never had the experience of being part of a community for an extended period of time, like most high school students," Vande Hei said. "So I thought it would be great to continue having those same friends and going to school along with them."

Wanting to pay for his schooling himself, he applied for an ROTC scholarship. While filling out the form for the scholarship, he made the decision to major in physics at SJU.

"I probably am predisposed to subjects where there is an answer, an answer that you know if you did it right or wrong. I certainly recognize that the farther you get in a science, the more things become gray," Vande Hei said.

After graduating from Saint John's in 1989, he was commissioned into the Army through ROTC, serving in Italy and Iraq. His commanding officers noted that he had a physics major - a rarity - and sent him to Stanford University to receive a master's degree in applied physics in 1999. He then taught physics at the U.S. Military Academy until 2003, when he reported to the Army's 1st Space Battalion at Peterson Air Force Base, Colorado Springs, Colo.

He was deployed again to Iraq, and then reported to the Johnson Space Center in July 2006 to serve as a spacecraft communicator (CAPCOM) in the Mission Control Center, Houston. He was one of a team of CAPCOMs who worked during Expeditions 15 to 20 to the International Space Station, and also for five space shuttle flights.

"Quite honestly, I think the liberal arts education was more important than any technical education (he received)," Vande Hei said of his days at CSB and SJU. "Some physics students have asked me, 'Of your education, what did you use the most?' I told them my English - my ability to communicate with people.

"Even in the Army, you have to write a lot of things. Your reputation can be established based on how you communicate, and how people perceive you.

"I also think there's a strong ethical component to the education that Saint John's gives you," Vande Hei added. "That was incredibly important, especially in the Army, because when you're potentially going to give soldiers orders that may cause them to put their lives at risk, every interaction you have with them, reinforcing that they can trust you, is really important."

In 2007, Vande Hei was one of 2,813 accepted applicants who began the process to become NASA astronauts. He beat those long odds to become an astronaut, and the next step would be to get a mission to the International Space Station.

"Because of my CAPCOM (experience), management knows that I understand how the Mission Control Center works," Vande Hei said. "How high they value that, relative to all the other things that impact their decision making (into who flies to the space station), I have no idea. All of us would love to know what the formula is to get a flight assignment, but none of us really know.

"It's interesting, because astronauts tend to be very high achievers, and we put more pressure on ourselves than other people put on us. The coaching we get is, if you're not getting any feedback at all, you're doing fine. I will officially be told if there's a problem. I'm confident of that."

And, that's nothing to laugh or cry about.