Home / Newsroom / He flies the president...of the United States

He flies the president...of the United States 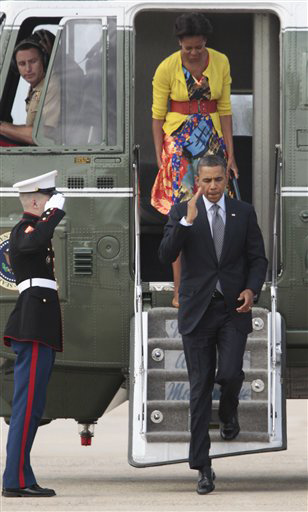 There's a big difference between flying a group of Marines into battle, and transporting the President of the United States to Camp David.

These days, the 32-year-old Saint John's University graduate flies President Barack Obama from the White House with Marine Helicopter Squadron One. It's a far cry from his days flying Marines in Iraq.

"Getting people safely from point A to point B is pretty much the name of the game for any helicopter pilot, but carrying VIP passengers does change things slightly," Litfin said. "For example, in the fleet (deploying forces of the Marines), you aren't too concerned about how smooth of a ride you provide to your passengers. They've got a job to do once they get on deck, and your job is to get them to their objective safely and efficiently. You can be as aggressive on the controls as the situation dictates.

"Doing VIP transportation, your main concern is the safety and comfort of the VIP. Therefore, any time we turn the aircraft, take off or land, it is done as smoothly as possible," Litfin said. "In training, the instructor pilots will use the analogy that the VIP just got on board with a cup of coffee ... you better not make him spill it."

Litfin has had an interesting ride getting to the pilot's seat.

He considered joining the military straight out of Delano (Minn.) High School, but was urged by his parents to give college a try and keep the military as a backup plan. He joined his older brother, Grant, on the SJU campus in the fall of 1999.

Litfin joined the Army ROTC unit his first year at SJU. But he became interested in the Marines when he saw Brian Warchalak '01 working out at Warner Palaestra with a T-shirt that advertised the Platoon Leaders Course.

"The Marine Corps excited me more than the other branches because of their reputation," said Litfin, who was sent to Officer Candidates School in June 2002 and completed that in August 2002. He was commissioned in May 2003, after he graduated from SJU.

Litfin received his private pilot's license while he was a first-year student at SJU, "so that got me interested in pursuing aviation in the Marine Corps," he said. After training in both airplanes and helicopters, he received his wings in September 2005.

In 2006, Litfin was deployed to Iraq for the first time.

He had one close call during his three deployments in Iraq, in October 2006. He and his crew were called in to evacuate a Marine who was wounded on patrol.

"On our departure from the landing zone, we received small arms fire from just outside the compound. The rounds severed hydraulic control boost lines and damaged our transmission," Litfin said. "The damage was severe enough to force us to make an emergency landing. Thankfully, we were able to limp our way back into the Army outpost we had taken off from before our hydraulic pumps completely cavitated from the loss of fluid.

"I had tied my helmet bag to a seat about three feet behind the cockpit earlier that day, and after I cleaned all the hydraulic fluid off of it I noticed it had several bullet holes in it."

Before his third deployment to Iraq in 2009, Litfin applied for Marine Helicopter Squadron One, which flies dignitaries like the president, vice president or foreign heads of state. Litfin ended up reporting to the squadron in June 2010. His first year was spent training to become a co-pilot on the three helicopters the squadron flies. Additional training eventually led him to becoming a White House helicopter aircraft commander.

Obama is the only president Litfin has flown for during his four-year tour with the squadron.

"Most of the time, they will just get on board and come up and say hello, or shake our hands as they depart the aircraft and thank us for the ride," Litfin said. "Our flights are usually pretty short, so we are pretty much focused on the mission from wheels up to wheels down.

"I was able to have some interaction with the president at Camp David when a group of us crossed paths with him on our way to the hangar. We had flown him up to Camp David for his birthday and he happened to be hanging out by our landing zone, so we greeted him and he asked how we were enjoying our stay. We shared some light-hearted banter about his golf game and he thanked us for our service and then we went on our way. Again, it was very brief but very memorable."

As an officer, Litfin has to be "a jack of all trades." He has several ground jobs and responsibilities that need to be taken care of on a daily basis.

"I feel my educational experience at SJU gave me a well-rounded educational background that allowed me to adapt to the new experiences and challenges I've faced as a Marine officer. As a communication major, all the writing and public speaking we did at SJU gave me a strong foundation and confidence in my public speaking and writing abilities which I've relied upon on a recurring basis - preparing and delivering flight briefs, and writing awards and fitness reports for junior Marines," Litfin said.