Fulbright winner gets opportunity to experience another culture

Editor’s note: This feature story on Mackenzie Carlson is the fourth of four stories that will appear this summer on the CSB/SJU website featuring graduates who received awards from either the Fulbright U.S. Student Program or the Fulbright Austria-United States Teaching Assistant program.

As a sociology major with a concentration in anthropology, Mackenzie Carlson would often read ethnographies about various cultures being studied.

They were interesting studies, Carlson recalled. But she was still missing something.

“I want to be able to actually experience (another culture) for myself, instead of reading a product of someone else having done that,” said Carlson, a 2021 graduate from the College of Saint Benedict.

She’ll get that chance in mid-September when she begins her Fulbright English Teaching Assistant (ETA) award to Taiwan.

“I always think traveling abroad and experiencing other cultures – especially for an extended period of time – it just gives you a broader perspective of the world,” Carlson said. “Instead of just living in one place your whole life and knowing the world from that point of view, I do want to have a different understanding and just know more about the world and  people and be able to understand more about different cultures.”

She’ll get to live that out in Taiwan, an island country in East Asia.

The Fulbright U.S. Student Program, sponsored by the Department of State and the J. William Fulbright Foreign Scholarship Board, places recent college graduates as English Teaching Assistants in schools and universities overseas. The ETAs improve international students’ English abilities and knowledge of the U.S., while enhancing their own language skills and knowledge of the host country.

Carlson has been told that the Taiwanese are friendly, welcoming people. That’s important to her because she is interested in human rights and relationships, particularly debunking perceptions about Asian culture and how some Americans feel that may have led to the COVID-19 pandemic.

“I applied to go to Taiwan before that was becoming frustrating,” Carlson said. “I think part of it is a lot of people who are hateful and ignorant in America have a lot of misconceptions about what a lot of these Asian cultures are like.

“If I could be like, ‘Well, I lived in Taiwan for a year and let me tell you that you are wrong, basically,’ to be able to refute those points if anyone is trying to make that argument,” she added.

Taiwan also was the first country in Asia to legalize same-sex marriage and hosts a large Pride parade, “which really appealed to me as a member of the LGBTQ+ community,” she said.

Finally, she has taken Chinese language classes since Carlson was a ninth-grader at Irondale High School in New Brighton, Minnesota, and as a Chinese minor at CSB.

“I wanted to go somewhere I could practice and improve my language ability,” Carlson said. “My high school Chinese language teacher (Linda Chang) is from Taiwan, and I wanted to go to her home country to have an impact on students there like she did for me when she came to teach in America.

“I always enjoyed going to (Chang’s classes), which in high school is saying something. She is a unique and special person. She cares about her students, and she was an effective teacher who held you to certain standards. She was willing to become vulnerable with us, knowing how hard she had to work to be here,” Carlson added.

Another important person who helped finalize Carlson’s decision to teach in Taiwan was CSB graduate Olayemi Fadahunsi ’18, who completed a Fulbright award in 2018-19 to Taiwan.

“I talked to her about an hour-and-a-half, and it was really nice. She just answered some of my questions about (Taiwan). What was it like? Did you try to travel around Taiwan? Was that easy? How did you get around your city? How was the actual workload of teaching? She was able to answer based on her experiences there,” Carlson said.

Carlson said she is really looking forward to her trip.

“I’m really grateful for the connections I’ve made at Saint Ben’s and Saint John’s,” Carlson said. “My anthropology professors (Ellen Block and Megan Sheehan), who connected me to (Fadahunsi) and her connecting me to someone else who had experienced it has been really neat.

“I know it’s kind of a cliché, but everyone talks about the Bennie and Johnnie connection, the alum connections there, and I think that has already come in very handy. Also, obviously the education I’ve gotten at Saint Ben’s, I feel like it has made me prepared for this,” Carlson said.

CSB and SJU students interested in applying for a Fulbright Award for the 2022-23 academic year should contact Phil Kronebusch, professor of political science and coordinator of Competitive Fellowships at CSB and SJU, or Lindsey Gunnerson Gutsch, director of Undergraduate Research at CSB and SJU. 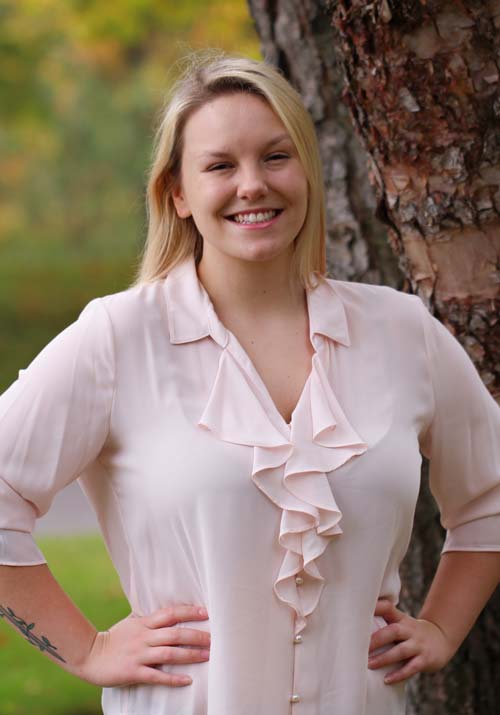