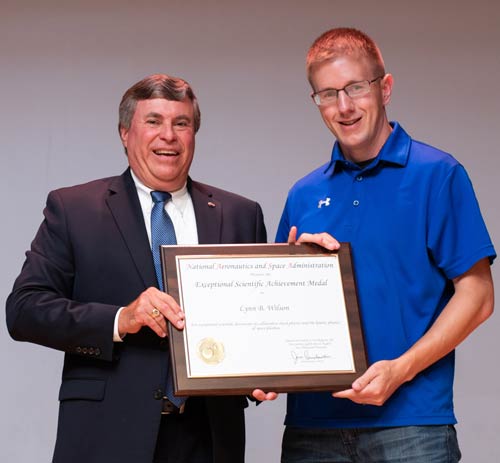 Yes, Lynn Wilson freely admits to being a nerd.

“I have been a nerd since my grandfather asked me if sunlight has weight back when I was 3 or 4 years old,” said Wilson, a 2005 graduate of Saint John’s University.

For the record, it turns out grandpa was right. “Light carries momentum, so it can exert a force on you called radiation pressure. It can behave like it exerts a weight on you,” Wilson said.

But the nerd has done OK for himself. After receiving his doctorate from the University of Minnesota, he joined NASA in 2010. Recently, the research astrophysicist received NASA’s Exceptional Scientific Achievement Award.

Wilson, who works at the Goddard Space Flight Center in Greenbelt, Maryland, was honored for his collective work on collisionless shock waves.

“Getting the opportunity to work at NASA directly out of graduate school was huge,” Wilson said. “It’s my dream job, and I am still scared that one day someone will let me in on the prank. It’s actually common among many of my colleagues that they still can’t believe they get to work for NASA even after 10-plus years of service.”

Wilson was asked what his job entails.

“The other half of my time is taken up as my role as project scientist of the Wind spacecraft,” Wilson said. “This involves updating and maintaining the project website, the publication list (and) data products from the instruments.

“I am in charge of disseminating new and exciting research to the public, NASA Headquarters and the scientific community. I am also in charge of the project funding, which involves funding the instrument teams and flight operations folks.

“Finally, I am also responsible for writing the Senior Review proposal every 2-3 years, which is a rather large document that lays out current spacecraft status, use of funding, projections of lifetimes for instruments and spacecraft bus (the main body of the spacecraft), data products and plans for final archival of said data and scientific results and targeted topics of future research,” he added.

“There are lots of reasons to be excited about working at NASA,” Wilson said.

A second craft, the Parker Solar Probe, continues to get closer and closer to the sun. In less than two years, the probe will be the first man-made craft to enter the zone surrounding the sun, where heating looks fundamentally different than what has previously been seen in space. The European Space Agency’s Solar Orbiter is scheduled to launch in early 2020.

Wilson, who is a native of Cohasset, Minnesota, majored in physics with a minor in mathematics at SJU and the College of Saint Benedict.

“I think success in academic research is founded on two critical personality traits more than anything: curiosity and persistence,” Wilson said. “I often like to tell kids and students during outreach events that I succeeded because I was more stubborn than the problems I chose to tackle.

When he started at CSB/SJU, Wilson believed he was “not smart enough to graduate, let alone get a Ph.D. in physics.

“I was determined that I would outwork my peers because that is really all I had control over. In my mind, if I could not succeed despite working 12-15 hours a day, then it just wasn’t meant to be,” Wilson said.

Wilson recalled benefitting from some outstanding professors at CSB/SJU.

“The physics department faculty is amazing and they have an excellent relationship with the University of Minnesota,” said Wilson, whose adviser was Jim Crumley, professor of physics at CSB/SJU who is currently chair of the department. A side note: Crumley’s doctoral adviser at the University of Minnesota was Cynthia Cattell – who later became Wilson’s doctoral adviser.

“I am also glad that I started at a small liberal arts school because I was not really ready for the anonymity of a large research university,” Wilson continued. “The physics and mathematics faculty were incredibly patient with me and it was because of that I was able to pass, let alone succeed.

“I think I also benefitted from the higher standards set at CSB/SJU than larger research universities for undergraduate school. I say this because a lot of my peers in grad school were initially overwhelmed by the workload. I was not shocked by it – it was significantly higher than undergraduate studies but not overwhelming – and that also helped me greatly later on.

“I guess the point is that I probably am more fortunate than I will ever know for having had the opportunity to attend CSB/SJU, and I am sure I will never fully understand or truly appreciate all the benefits I reaped from my years there,” Wilson said.

Not bad, for a nerd.