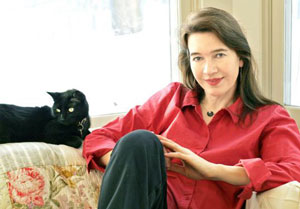 "An Evening with Louise Erdrich" will give insight to her work and the importance of creativity in our lives and in our communities.

Erdrich, who was born in nearby Little Falls, Minn., is a Native American author of 13 novels, poetry and children's books. She has been widely acclaimed as one of the most significant Native American writers of the second wave of what critic Kenneth Lincoln has called the Native American Renaissance.

In April 2009, her novel The Plague of Doves was named a finalist for the Pulitzer Prize in fiction. The book also captured the Anisfield-Wolf Book Award. Her debut novel, Love Medicine, won the 1984 National Book Critics Circle Award, and The Last Report on the Miracles at Little No Horse was a finalist for the National Book Award. Her latest book, Shadow Tag, was released earlier this year.

Erdrich, who has a bachelor's degree from Dartmouth College in 1976 and a master's degree from Johns Hopkins University in 1979, lives in Minnesota. She is the owner of Birchbark Books, an independent bookstore near Lake of the Isles in Minneapolis.

Erdrich also plans to meet with students from the College of Saint Benedict and Saint John's University prior to the event.

Her appearance is co-sponsored by Fine Arts Programming at CSB and SJU and the Literary Arts Institute at CSB.

The mission of Fine Arts Programming at CSB and SJU is to foster an artistic environment of creativity that provides transformational experiences connecting our community to the world around us.

The LAI was founded in 1997 to foster creative writing, publishing and interaction between students and writers. The LAI brings nationally recognized authors to the CSB and SJU campuses, promotes literary events, holds conferences, supports publications and encourages the artistry of fine letterpress.