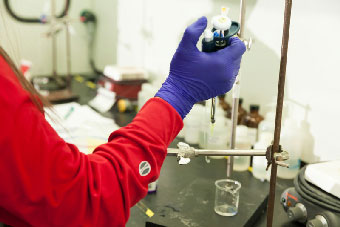 Three chemistry professors from the College of Saint Benedict and Saint John’s University are helping decrease the cost of college textbooks while increasing the availability, usage and educational value of open textbooks.

Henry Jakubowski, Chris Schaller and Kate Graham are three of 62 faculty members nationwide who will contribute content to the LibreText Project, a non-commercial open textbook organization initiated at the University of California, Davis.

The project received a $5 million Open Textbooks Pilot Program award from the Department of Education. With LibreTexts, students, faculty and outside experts work together to build freely available open education resources that supplant conventional paper-backed books.

Open textbooks are textbooks that have been funded, published and licensed to be freely used, adapted and distributed. These books have been reviewed by faculty from a variety of colleges and universities to assess their quality, and they can be downloaded for no cost, or printed at low cost.

LibreTexts currently encompasses 12 widely used college disciplines from chemistry to the humanities with over 68,500 pages. Used across the nation as primary course textbooks and as supplemental learning resources, LibreTexts have already recorded 250 million pageviews.

“I think we were included because we have demonstrated productivity in the areas in which LibreTexts is interested, and they wanted to have dependable collaborators so that they could go back to the Department of Education in a couple of years and show them that the grant had been successful,” said Schaller, acting as a spokesperson for the group.

“In addition, they have also been interested in the past because of our innovative approaches to teaching chemistry,” Schaller said. “They wanted the collaborators to represent a broad range of research institutions, liberal arts colleges and community colleges. That aim was driven by the goal of making new online materials that appeal to students across a very broad range of institutions.”

All three of the CSB/SJU professors will develop content in areas LibreTexts would like to see expanded, Schaller said.

Delmar Larsen, LibreText Project director and an associate professor of chemistry at UC-Davis, began the project 10 years ago when he created ChemWiki, an online chemistry book. ChemWiki grew into one of the most visited educational sites on the Internet, and is now known as Chemistry LibreTexts.

It has been conservatively estimated that LibreText has already saved students $30 million while “providing a high-quality, modern learning experience,” Larsen said in a release from UC-Davis. “Our goal, with the support of the award, is to help students save at least $50 million in textbook costs over the next three years in a thousand classrooms.”

According to the program’s July 30 Federal Register notice, the cost of college textbooks jumped 88 percent between 2006-16. In the 2016-17 academic year, the average college student budget for books and supplies had risen to $1,263 for students at four-year institutions.

There’s also a portability aspect as well. “Instead of a shelf full of STEM (science, technology, engineering and science) texts, students have them all available from their laptop,” Schaller said.

“In terms of the new directions in getting into worksheets, of course, there are proven benefits in the use of interactive pedagogical approaches rather than static reading in order to assimilate information into your knowledge base,” Schaller added.