A great jump into a Great Lake continues community bond 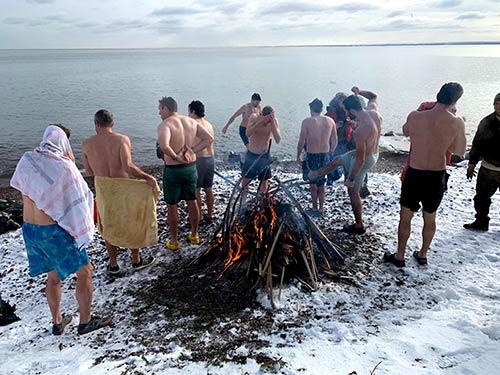 The Lake Superior jumpers warm up around a post-jump fire. 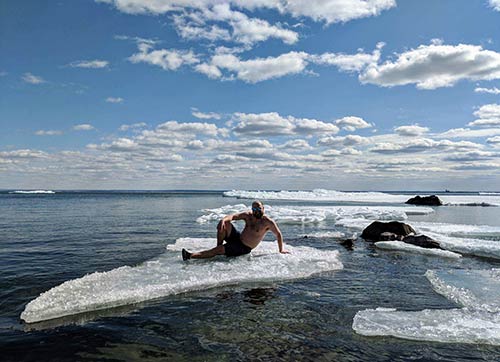 Anyone who’s ever taken a dip in Lake Superior in mid-July knows how cold the water can be, even during the warmest months of the year.

So the idea of taking a plunge every month – including during the often bone-chilling cold of January and February in Duluth, Minnesota – might sound downright crazy.

But for Saint John’s University graduates Michael Scharenbroich, Jeff Polzin and Michael Henderson, submersing themselves in the lake’s icy water has become the centerpiece of monthly gatherings that have helped build a sense of community among a group of fellow College of Saint Benedict/SJU alums and others living in the area.

“It’s become a gathering of younger couples with young kids,” said Scharenbroich ’06, who along with his wife Kate Thompson-Scharenbroich (CSB ’05) plays host to the group at the family’s home on the lake just off London Road – not far from the infamous Glensheen Mansion in Duluth.

“It’s been a way of getting to know people and building friendships. There’s no judgement (about jumping into the water). If you want to jump, that’s great. If you don’t and just want to hang out, that’s great too.”

The group, which at its core consists of about 10 couples and their children, had its origins when Scharenbroich’s family first moved to Duluth in 2015. He had known Polzin’s wife Kristina (Sherman, CSB ’06) and was then introduced to Polzin ’04, a Duluth native whom he had not gotten to know during their time at SJU.

“It was really that classic Saint John’s bond,” said Scharenbroich, a former Johnnies football player who was a part of the 2003 Division III national championship team.

“We started talking right away. And we just said ‘Hey, have you ever jumped in the lake?’ So we decided to do it. It started out with the two of us and we’ve been doing it every month since.”

Polzin and Scharenbroich have made the jump 56 months in a row, sometimes having to move aside large chunks of ice to create enough open water.

“You have to overcome your fear and embrace the moment,” said Polzin, a dentist. “When your whole body goes underwater, there’s nothing else you’re focused on except being right there in the present.”

“I did ROTC at Saint John’s, then served 11 years of active duty (in the U.S. Army),” said Henderson, who now works as a financial consultant. “When I got out and we moved up here, I didn’t know anybody (in town). But Mike invited us over and that’s how we met the group.

“It’s funny because (Polzin and I) didn’t really know each other at Saint John’s. But he had studied abroad in Central America the year before I did and we lived with the same host family. We knew a lot of the same people so we hit it off right away.”

Including bonding over their passion for taking the plunge – a passion also shared by Dave Neitzke '07, whom the group said has also been a regular jumper.

“But it’s not all Johnnies and Bennies,” Henderson said. “Some are people we’ve just met in Duluth and become friends with. And it’s not just about jumping into the lake. Everyone brings food. The kids play together. It’s more about spending time with good people and having fun.

“Some of the people who come are nurses and EMTs (emergency medical technicians),” he continued. “So it’s a safe environment. We build a fire. There’s a lot of bonding that takes place.”

In February, the group makes its efforts part of an annual Polar Plunge fundraiser that raises money to benefit the Special Olympics. Care is taken not to hit the water at times when the wind is too high, or conditions are otherwise unsafe for any reason.

“Lately, because of COVID, we’ve been doing staggered jumps so that we can maintain social distancing but still keep it going,” Scharenbroich said.

It’s a tradition that may seem wild to others, but it’s one the group is determined to keep extending – at least for a while.

“I think we calculated that No. 100 would come right around my 40th birthday,” Scharenbroich said. “So that would be a good way to wrap it up.”