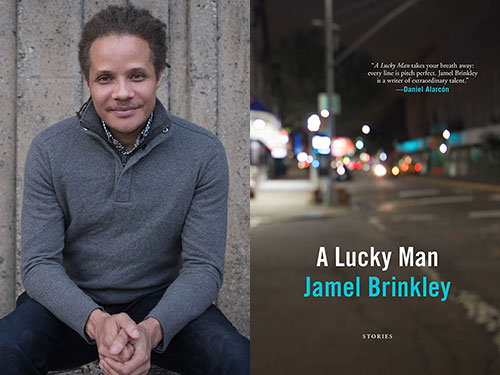 When you read a short work of fiction, you expect the author to bring a singular character to life.

Brinkley will present a public reading of his book – which earned the 2018 Sister Mariella Gable Award from the College of Saint Benedict Literary Arts Institute (LAI) - at 7 p.m. Tuesday, Sept. 11, at room 204, Gorecki Center, CSB. The event is free and open to the public.

“A Lucky Man” presents a powerful portrait of black men and boys who have experienced many forms of trauma. These characters struggle to create a stable space for the self while navigating complicated social and familial communities and a world shaped by race, gender and class.

Writing in the Chicago Review of Books, Mrjoian said that each of the nine stories of African-American men in the book “goes far beyond this basic formula. In Brinkley’s work, no character is left untended, no aspect of identity is overlooked, and the results are well-inhabited worlds that feel infinite. A lot of short stories exist in a snow globe, but the nine stories presented here are each a big bang. They burst forth through space and time. They are larger than the sum of their components.”

Mrjoian concludes that the beauty remains, even if it is obfuscated by the hard truths of racism, misogyny and aging.

“Underneath it all, through all the vulnerable and traumatic moments, some slice of hope for a new direction holds strong. ‘A Lucky Man’ is not only a standout debut for the year, but also a testament to what can be achieved in a short story,” he wrote.

A graduate of Columbia University and the Iowa Writer’s Workshop, Brinkley is currently the Wallace Stegner Fellow in Fiction at Stanford University. He has had his works of fiction published in “The Best American Short Stories of 2018,” and in magazines and journals like A Public Space, Ploughshares, American Short Fiction and LitMag.

Brinkley served as the 2016-17 Carol Houck Smith Fiction Fellow at the Wisconsin Institute for Creative Writing.

Sister Mariella Gable was an English professor at CSB from 1928-73 and was also a Dante scholar, poet, editor and writer. Sister Mariella tirelessly promoted the cause of two then little-known authors, Flannery O’Connor and J.F. Powers, and introduced audiences in the United States to such Irish writers as Frank O'Connor, Seán Ó Faoláin, Mary Lavin and Bryan MacMahon through her many essays and anthologies.

The Sister Mariella Gable Award is given each year by CSB for an important work of literature published by Graywolf Press in Minneapolis. Graywolf Press, described by Ploughshares magazine as “arguably the best small press in the country,” and the Literary Arts Institute at CSB have formed an innovative collaboration to explore new ways of promoting the literary arts on campus, to audiences in the surrounding area and in the Twin Cities.

The event is sponsored by the LAI with the support of the Manitou Fund.