As one of three North Americans on a committee of 24 experts who recently created a document related to the Catholic Church’s Synod on Synodality, a Saint John’s School of Theology and Seminary professor has found herself in growing demand to spread the message of what it contains.

Kristin Colberg, Ph.D., has spoken or will speak to audiences of other theologians in dozens of groups around the world – in person and on Zoom – to explain what has been synthesized so far in the synod, which is themed “For a Synodal Church: Communion, Participation and Mission.” She spent two weeks this fall in Frascati, Italy, in prayer, reflection and discussion while helping draft a summary of listening sessions at the diocesan level throughout the world. Information from those sessions was then synthesized at national levels prior to the meeting of the international theological commission in Frascati.

The document they produced was titled “Enlarge the Space of Your Tent,” honed by members selected by the Vatican to provide a basis for the synod’s continental phase, which will happen in February and March. Pope Francis has extended the synod from its initial conclusion in the fall of 2023 to the fall of 2024, and Colberg stands ready and eager if she should be called on again as the revelations move toward further articulation.

“Our objective was to lift up to the world Church ‘This is what we heard,’” Colberg said of the communal messaging process in Italy. “The two weeks we spent together wasn’t all about writing the report. For three or four days, we moved between small groups, discussing ‘What did we hear the people of God say?’ We had an empty chair exercise, where we had some of those same discussions and focused on who perhaps hasn’t been represented in discussions like this before. What I find most encouraging is that ‘Enlarge the Space of Your Tent’ doesn’t quote Pope Francis. It doesn’t include documents from the church or theological papers. It’s just passages from the Bible and what people are saying.”

Every diocese accumulated 10 pages of feedback. Those were collected in more than a hundred countries, each of which produced a 10-page summary of the local reports. Colberg reviewed approximately one-third of those national reports – about 300 pages in all – during several days sequestered in the Saint John’s Abbey Guesthouse and drew out themes representative from the participants as well as quotes to support them.

She said the experience in Frascati was the pinnacle of her career so far.

“It was a global conversation about the wounds people have experienced but also the joy that keeps us here in the Church,” Colberg said. “It felt like we were really doing something important, and it was – because the Church has never done anything like this before. Even if you’re not interested in the Church, it was 12 days with three people from every continent on earth. What joys had been expressed to them? What concerns were brought to them? I don’t know if I’ll ever have that experience again.”

On the last day in Italy, the members of the commission met with Francis, who had asked to be kept abreast of their progress. He received them in the same room where he gave audience to the former Queen Elizabeth II at the Vatican. Francis released the document for the continental phase in late October and it has generally been met with acclaim.

“The desire is to be a more welcoming Church,” Colberg said. “The synod is a source of renewal and excitement. It’s amazing that lay people are being involved in this stage and we anticipate there could be further calls on the commission. If that should happen, I’d be honored again to participate as a representative of the Saint John’s community – one that is already very well-respected by the people I met and worked with in Frascati.” 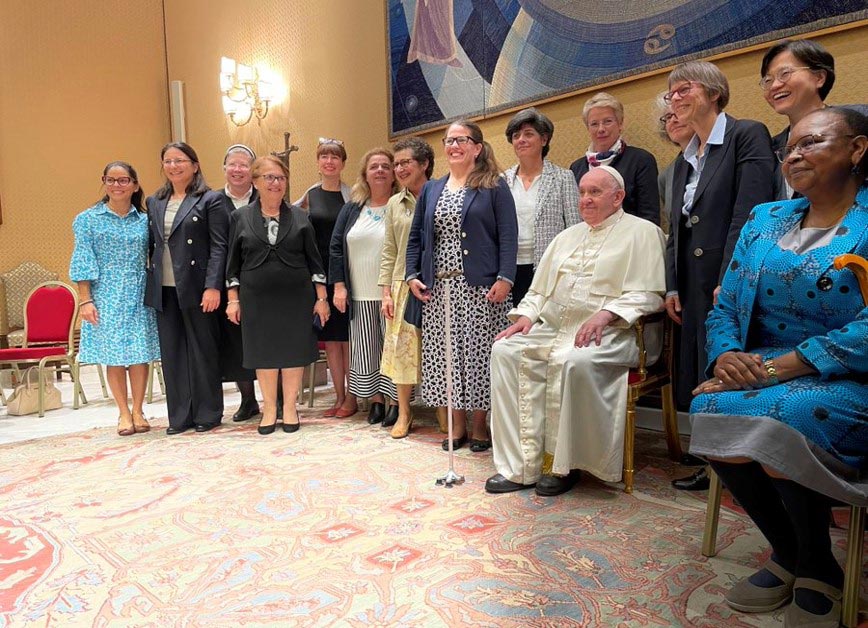 Kristin Colberg (eighth from left in blue jacket) was among a group of women from an international theological commission to meet in October with Pope Francis at the Vatican. Colberg helped draft a document for the continental phase of Francis' Synod on Synodality: For a Synodal Church: Communion, Participation and Mission. He has extended it by a year from 2023 to 2024 and it remains to be seen whether Colberg and other participants will be called on again before it concludes.