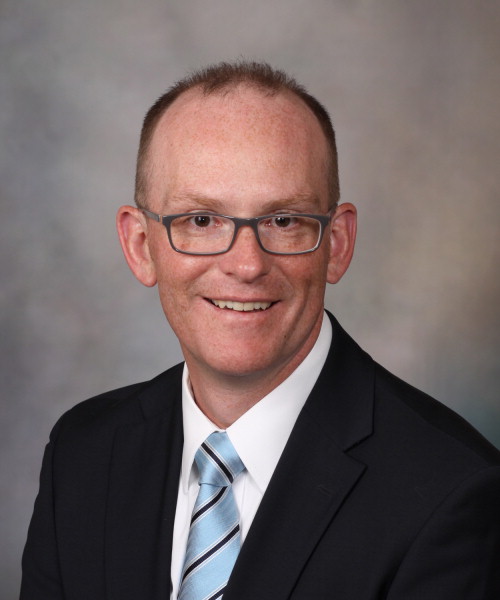 As a standout running back at Saint John’s University in the mid-1990s, D.J. (Daryl) Kor ’96 saw first-hand the importance of a well-designed game plan.

These days, the physician at the Mayo Clinic in Rochester, Minnesota is still helping to draw out those plans of attack. But now he’s facing far more formidable opposition than he ever saw on the football field.

Kor – an Academic All-America selection during his time with the Johnnies – is a doctor in the Anesthesiology and Perioperative Medicine department at Mayo and serves as medical director of the department of data and analytics for the Mayo Clinic, which includes hospitals and clinics in Minnesota, Iowa, Wisconsin, Florida and Arizona.

In that role, he plays a key part in helping to develop and refine the internal models Mayo continues to utilize in dealing with the impact of the ongoing COVID-19 pandemic.

“Our whole effort at Mayo, as we attempt to better understand COVID - what its impacts are and how to live with them - reminds me in many ways of my SJU football experience,” Kor said.

“It’s really all about the team. Everybody has their role, everybody takes pride in that role and everybody does everything they can to fulfill that role.

“It’s really been tapping into the collective minds of a lot of smart and talented people who are able to sit around a table working together to look at the most current and accurate data we’re able to get our hands on,” Kor continued. “We want to look at what’s actually happened, not what people are speculating about or think might happen. But what we know has happened. And once we get that, we’re better able to project where we might be tomorrow or in the next few weeks.”

Those projections look different for different places. For example, Mayo’s two campuses in Arizona and Florida are currently dealing with a major surge in cases, whereas the impact of COVID in Minnesota is much less dramatic right now.

“He’s really been at the forefront of our efforts to understand how impacted our different locations will be,” said fellow SJU graduate Mike Morrey ’90, a regional chair of administration at Mayo.

“We have unique geographical situations, so those efforts are so important. Several weeks ago, we got the forecast from the model that Arizona would really be challenged. This was before you started hearing in the news about the jump in cases in places like Arizona, Texas and Florida. Then, all of a sudden, the cases almost doubled in Arizona.

“So the efforts of D.J. and his team helped us to be prepared for that,” Morrey concluded.

Kor said the most important factor in modeling during the pandemic has been adjusting to changing situations and information when it comes to such a new virus.

“Many things have happened that we just haven’t been able to predict and we’ve had to adjust,” he said. “Agility is really a key factor in health care right now - being able to respond to rapidly changing situations.

“The models we’re using today are not the same as the ones we started with. But we saw very clearly early on that the models that were going to be best for us were Mayo models that we developed ourselves based on our unique local experiences. Rather than a model that had put together in another part of the country or the world.

“Things definitely change and that’s a major part of our modeling activity – trying to find out what the next hotspot is going to be.”

The team at Mayo has also been in close communication with the office of Minnesota Gov. Tim Walz as the state has developed its response to the virus. That includes consulting on how things might look in the fall, which will have an impact on if schools can reopen for in-person classes.

“It’s not so much the kids in particular we’re concerned about as they don’t seem as a rule to be impacted as severely – though that’s not uniform and there have been severe cases,” he said. “But those kids can go home and expose parents and grandparents who may be more susceptible.

“So that’s what we’re trying to model, realizing events that happen on a given day may not manifest themselves for two weeks or maybe even four or six weeks down the line.”

Kor said even the most accurate models can be impacted by public behavior, which makes taking the recommended precautions so important.

“There’s nothing we can provide in the healthcare setting that’s as impactful as those simple things: social distancing, washing your hands and wearing a mask,” he said. “Taking those measures can go a long way in helping stop the spread of this virus.”