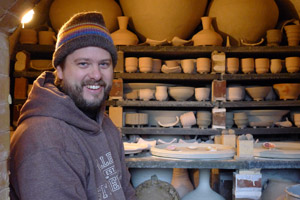 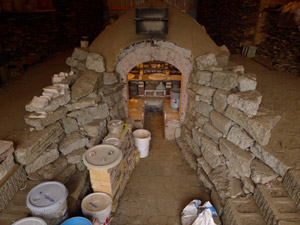 The S. Dennis Kiln at CSB

About 40 College of Saint Benedict and Saint John's University students will be getting a late Halloween treat on Nov. 3.

The third firing of the Sister Dennis Kiln at CSB begins Thursday, Oct. 31, and continues through Sunday, Nov. 3. As many as 1,000 items could be in the firing, according to Sam Johnson, assistant professor of art at CSB and SJU who will be overseeing the firing.

"They (the students) will start to get their first pieces of art of the semester," Johnson said. "I think for the students, especially the intro to ceramics students, it's just an adventure to be making things. I don't think they have a lot of pre-conceived ideas about what the results will be.

"One of the reasons I like wood firing with the students is that it is a communal activity - it's a bonding activity."

The students will fire the kiln, which is named for S. Dennis Frandrup, OSB, professor emerita of art at CSB and SJU, and stoke it every six to 15 minutes with wood gathered from the forest and grounds surrounding the kiln. Throughout the weekend, students will be supervised by Johnson and several other experienced artists.

Katie Walz, a junior art major at CSB, volunteered at the kiln firing last spring. It was her first firing.

"I expect to be working over 20 hours throughout the whole process," said Walz, who will be firing around 20 pots at the kiln. "I am excited to learn more about firing overall, how the outside temperature affects the heats and how smoke can affect the color. The whole process is very rewarding for me, and I am excited to be a part of this experience again."

"It's a really wonderful mentorship opportunity," Johnson said. "For hours, I'm with the students at the kiln, and we're talking about what's happening inside the kiln - for example, if you use a certain type of wood, it kind of affects the kiln in a certain way. It allows time for interaction, one-on-one interaction, in a way that a classroom doesn't."

Kilns are an essential part of the manufacture of all ceramics. Clay materials are shaped, dried and then fired in the kiln. The final characteristics - such as colors and patterns of an item - are determined by the composition and preparation of the clay body, by the temperature at which it is fired and the glazes that may be used.

The Sister Dennis Kiln is an anagama kiln, which has been used since medieval times and is considered the oldest style of production kiln, brought to Japan from China via Korea in the 5th century.

Johnson said one of the elements of the kiln is that there is a lot of variation within it during the firing.

"It's not entirely uncontrolled, but it's hard to know exactly what's going to happen in any one place. It's kind of the opposite of trying to work with precision," Johnson said. "It's more of working with natural forces in a collaborative way, to create something. You kind of have a ballpark idea. There's strategies to encourage certain types of things, but you don't know.

Leng Xiong, a first-year environmental studies and natural science double-major at SJU, is looking forward to the firing process. He will have nine items in the firing.

"I am very intrigued to see how heat hardens clay and changes the color drastically from a mild brown to a hot pinkish color," Xiong said.

Johnson said members of the CSB and SJU communities as well as the general public are invited to observe the firing throughout the weekend. The kiln is located on the southern edge of the CSB campus, near the maintenance/transportation building. "If everything is right, we should start at 4:30 p.m. Thursday (Oct. 31)," Johnson said, adding that it will end sometime Sunday, Nov. 3.