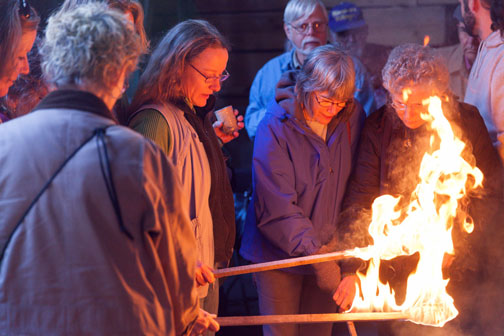 The public is invited to the 2019 lighting ceremony and firing of the Johanna Kiln at the Saint John’s Pottery. The lighting event begins at 4 p.m. Friday, Oct. 18, and the kiln firing continues through Sunday, Oct. 27.

The Johanna Kiln is the largest wood-burning kiln in North America. Firing a kiln of this scale is the result of two years of planning; local clay and glaze materials are prepared, and Forest Stewardship Council certified firewood is gathered from the Saint John’s Abbey Arboretum.

Designed and built by Master Potter and Artist-in-Residence Richard Bresnahan, the Johanna Kiln can hold up to 12,000 works of pottery and sculpture.

For the participants, a kiln firing is in some ways like a homecoming. Several large crews gather to maintain the fires over a continuous 10-day period. Key to each firing is the one-of-a-kind sense of community that forms among participating artists, volunteers and visitors.

About the Saint John’s Pottery

For 40 years, the Saint John’s Pottery has embodied a commitment to the integration of art and life, the preservation of the environment, the linkage between work and worship and the celebration of diverse cultures.

The studio engages artists, students and visitors in the work of artistic creation in relationship to the natural environment. It supports an Apprenticeship Program, an annual Jerome Foundation Emerging Artist Program, and the Mary Livingston Griggs and Mary Griggs Burke Foundation fellowship for visiting Japanese artists.