Milestone Johnnie-Tommie game to be played at U.S. Bank Stadium 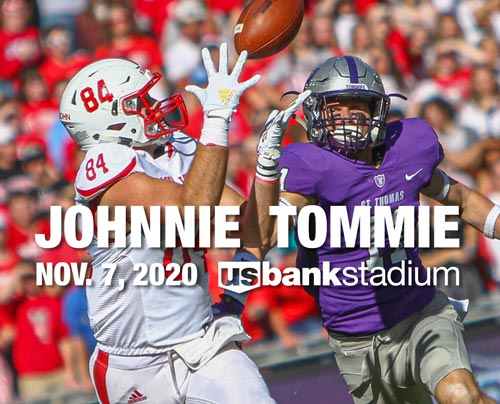 The latest chapter in the storied 119-year football rivalry between Saint John’s University and the University of St. Thomas will unfold this fall at one of the premier gridiron venues in the country.

“Saint John’s is thrilled to be able to partner with U.S. Bank Stadium, the finest venue in the NFL,” said Saint John’s athletic director Bob Alpers ’82. “Since the announcement that St. Thomas has been invited to join the Division I Summit League, ticket demand for November’s game has already been off the charts.”

“U.S. Bank Stadium will be an incredible venue to host this historic game,” said SJU head football coach Gary Fasching ’81. “We want everyone to be able to see this final game in one of the great rivalries in all of college football.”

“We’re tremendously excited for our alumni and fans to have the opportunity to see this milestone game in this exceptional facility,” added Adam Herbst ’99, executive director of university relations at Saint John’s.

The 2020 football season will be the last in the Minnesota Intercollegiate Athletic Conference for St. Thomas, which is planning to reclassify directly to Division I in 2021.

Anticipated ticket demand for the 90th and final installment in a rivalry that dates back to 1901 is a prominent reason for moving the game – originally scheduled to be played at Clemens Stadium in Collegeville – to U.S. Bank Stadium.

“This is a great opportunity for our alumni and fans,” said Rob Culligan ’82, vice president for institutional advancement at Saint John’s. “What better place to watch and enjoy a game on a frigid November day than in the comfort of an indoor, heated facility – the home of the Minnesota Vikings, the site of a Super Bowl and the Final Four.”

Ticket sales to the general public will begin March 13. Tickets will be available online at www.ticketmaster.com or in person at the U.S. Bank Stadium Ticket Office, located at the corner of 4th Street South and Chicago Avenue in Minneapolis.