From Collegeville to the Tokyo Dome 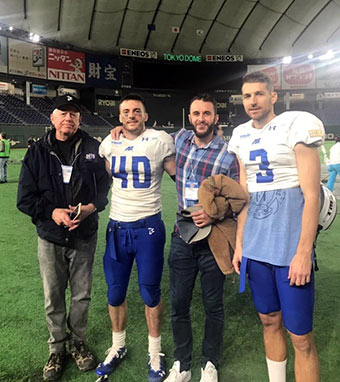 John Stanton ’10 came to Saint John’s with a passion for football.

His interest in Japanese culture grew during his time on campus.

And he had no idea the two would intersect in such long-standing fashion post-graduation.

“I was getting ready to move to Japan in a few weeks,” recalls Stanton, who first worked as an English conversation instructor there following his final football season in 2010.

“And (a family friend in California), who himself was a high school coach in the area and the father of my high school teammate, asked me if I intended to stay involved in football,” added the linebacker, who led the Johnnies in tackles in both 2009 and ’10.

“I told him of course I was interested, but in my mind I had told myself my football career was over. A ‘time to join the real world’ type of introspection. This friend told me he knew a guy who was playing in Japan who was a few years older than me, and that if I was interested in learning more about it that he would put us in touch.”

The league is known as the X-League. Founded in 1971, it is the top-level American football league in Japan. Competition is based on NCAA college football rules, though there are some deviations - such as the length of quarters, which are only 12 minutes.

It has become home for Stanton, who is now entering his eighth season with IBM Big Blue, a team that has advanced to the Japan X Bowl each of the past two years.

“The competition level here is very strong,” Stanton said. “People don’t really know this but (the league) is considered by many the third-most competitive behind the NFL and CFL (not including soon-to-start play American leagues like the XFL). We get American players from (Division I) universities like UCLA, Arizona State, Northwestern, Colorado, Washington, Louisville and others.

“I am one of two (Division III) players playing in the top-level league.”

And he has excelled, earning a spot on the all-league team four times.

According to voting by his fellow players conducted by Inside Sport: Japan, a media organization that covers the league, he was ranked the fifth-best X-League player in 2018 and the eighth-best this year.

And Stanton – who is currently working as a logistics specialist for American company GCX, which manufactures mounting solutions for patient monitoring devices used in hospitals and medical offices – has done it all despite switching positions.

“I ended up a tight end in Japan because when I came to try out for the Big Blue there were already two foreign defensive players on the roster,” said Stanton, who explained that only four foreign-born players are allowed on a team, and only two can be on the field at the same time.

Though loopholes do allow Americans who graduated from Japanese universities, or Americans raised in Japan, to not count against those limits.

“Head Coach Shinzo Yamada explained to me that former UCLA QB Kevin Craft would be joining the team and that he would like me to try playing TE.”

Stanton and Craft have gone on to become one of the league’s most dynamic offensive duos.

“For a former D3 LB to change position to tight end and have the success he has had against guys that played at the highest levels is beyond incredible,” said John Gunning, who covers the league as the creative director for Inside Sport: Japan.

“He has been a major reason Big Blue has made the championship game two years running.”

Stanton’s road to Japan began almost by accident as a student in Collegeville.

“Actually I was trying to register for Chinese, but all the classes were full,” he said.

“Japanese was my second choice. I fulfilled my language requirement at SJU and even spent a month in Japan on a study-abroad program through the University of Kansas after my sophomore year. I had been introduced to Japanese culture as a kid through anime cartoons and movies mostly, but it wasn’t until I studied more about the culture and history at SJU that my interest starting peaking.”

He pointed to Professor Richard Bohr and Professor Manju Parikh as instructors who helped kindle his growing interest in all things Japanese.

“For the first time, I was learning in depth about Asian history and their passion for the subject definitely rubbed off on me,” he said.

“I will always remember the lasting impact those courses had on me.”

Of course, he didn’t expect that passion to provide an outlet to continue his football career as long as he has.

American football is still a growing game in Japan, but Stanton said the interest level is there.

“The size of crowds totally depends on (the) importance and (the) location of (the) game,” he said. “For some regular-season games we will have just a few hundred people there. But in the championship game venue at the Tokyo Dome, we have played in front of crowds of 25,000 to 30,000 people.”

That makes for an exciting atmosphere, one Stanton is grateful to be part of.

“The greatest things I’ve accomplished over here have been developing relationships and helping build the IBM Big Blue into a winning program,” he said. “I also met my wife, Sayuri, a cheerleader, through the team and we are expecting our first child at the end of November.

“As an individual, playing in multiple league championships and being chosen as the top TE in the X-League (in) five-out-of-seven seasons are things I am also really proud of.”

And he said he would advise any current Johnnies athlete who gets the chance to play internationally to seize the opportunity.

“These are opportunities not just to earn money doing what you love, but to see the world and gain a new perspective,” he said. “These are rare chances for young college graduates and I would encourage anyone who loves (their sport) to explore what possibilities are out there.

“Never let anything stand in the way of you pursuing your passion.