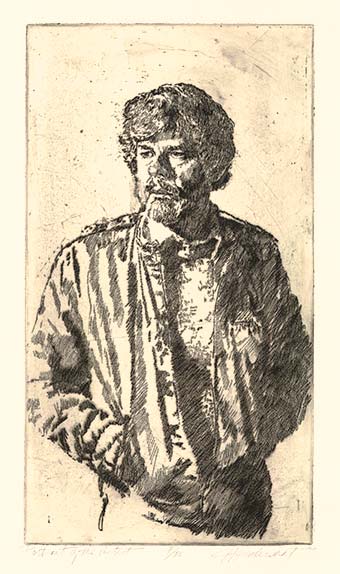 Outside, the Saint John’s University campus was emptying quickly as students were completing their finals and heading home for the holidays.

Inside the Alice R. Rogers and Target Galleries at the Saint John’s Art Center, however, things were a bit more hectic.

On the walls of the galleries were some of Jim Hendershot’s artwork in printmaking, graphite and charcoal drawings and enhanced prints/mixed media work, most hung with a piece or two of blue painters’ tape reflecting a “should it stay or should it go” decision to his upcoming exhibit.

With a sweep of his arm, Hendershot indicated that it was going to be difficult to select the 95 or so items that will be on display.

“It’s just like visiting old friends that I haven’t seen for a while, because they’ve all been such a part of my life,” said Hendershot, an associate professor of art at the College of Saint Benedict and Saint John’s University who will be retiring this spring after 51 years of teaching (48 years at CSB and SJU).

“I call it my journey,” he added. “There’s stories behind almost all of these pieces. I really think of them as family, and they all have their own tales.”

Hendershot will display these “stories” and selected outstanding works from his students during "James L. Hendershot, Retrospective Fifty: Structures with Figures" from Jan. 28-March 1 at the Alice R. Rogers Gallery and Target Galleries at the Saint John’s Art Center. An artist reception is from 5-7 p.m. Friday, Feb. 1 (note date change), at the Art Center, with Hendershot speaking at 6 p.m.

“We are so fortunate to have Jim share his life story through his art in this retrospective exhibition,” said Jill Dubbeldee Kuhn, gallery manager. “It is exciting to see the expanse of work he has produced over a lifetime. Students, colleagues and visitors alike will have an opportunity to travel this journey and be inspired by his dedication to his art and teaching.”

What a journey it has been

The exhibit will showcase many themes from Hendershot’s life:

The funny thing was, Hendershot’s life path almost took him in a different direction.

“As a child, I was really interested in becoming an architect,” said Hendershot, a native of Cleveland. “Something changed my plan in high school. I took a trip with the Art Club – which I wasn’t in - to the Cleveland Institute of Art, and everything woke up. I was just, ‘Wow.’ ”

He received a BFA in 1967 from the Cleveland Institute of Art and Case Western University. He then went to Syracuse University and received his MFA in 1970 while teaching classes there.

“I’ll tell you a little story,” Hendershot said. “At the end of my first year at Syracuse, there was a job opening, I think it was at Hamline. All I could think about, I just said to someone, was (Minnesota) must be like Siberia.”

After two years of teaching at Syracuse, he taught for a year at Monticello College in Illinois (now known as Lewis and Clark College). Looking for a job, Hendershot was invited by Gordon Goetemann, head of the Art Department at CSB and SJU, for an interview.

“(Monticello) was kind of close to St. Louis. And, when I came here that day, it was hotter than St. Louis, which says a lot, if you know St. Louis. I was told the following Monday or Tuesday, there was snow coming down (at Collegeville), and it was May,” he said, laughing.

While teaching offered a fixed income for his family, his goal “was to be accepted as an artist in New York.”

Hendershot found time to travel to New York by teaching a January-Term art course. He also managed to sneak away on weekends.

“No one knew that,” Hendershot said. “With the mod schedules we had, when it fell on (day) six or (day) one, I would go to New York. I had this huge portfolio, which (caused) damage to my back. I’d just walk 50 blocks to galleries. Those days, there were no websites, and you didn’t have attachments or something you sent. You could go and address gallery directors or the museum curators directly.”

He almost caught his big break during one such visit to New York. Hendershot was able to meet face-to-face with Marcia Tucker, who was then curator of the Whitney Museum of American Art. After going through Hendershot’s portfolio, she wanted a drawing of his to display. One problem – the drawing was owned by Malcolm Lein, the director of the Minnesota Museum of American Art.

They tried to locate Lein, who was in Europe, but both Hendershot and Tucker were unable to do so.

“What she (Tucker) did was, she invited me to the Whitney Biannual. This invitation is accepted by artists like Andy Warhol – some big-name artists. And so, I was never able to get in, because we couldn’t locate (Lein) in Europe, although I always felt like I was in it,” Hendershot said.

“We as an institution, dedicated to the importance of art and beauty in our lives, wish to thank Jim for sharing his work with us,” Dubbeldee Kuhn said. “I see this show as a celebration of our Benedictine values married in his deep commitment to education and the arts.”

When graduation ceremonies roll around in May, Hendershot will retire from teaching following a 51-year career.

“I do love teaching. I love young people. It’s going to be hard when next year comes,” Hendershot said. “I know I can say it now, but I haven’t experienced it yet, but I will enjoy making art and traveling.

The hours of the Alice R. Rogers and Target Galleries at the Saint John’s Art Center are from noon to 6 p.m. daily, and from noon to 9 p.m. on Thursdays. The exhibit, which is part of the Visual Arts Series at CSB and SJU, is free and open to the public.