If things had been different, Jeremy Messersmith might be performing as a trumpet player.

Messersmith took trumpet lessons as a child and played the instrument as a youth. But before he could become the next Al Hirt, Herb Alpert or Doc Severinsen, braces ended his trumpet playing days.

Luckily for audiences, Messersmith took up the guitar. Now, he’s one of the top indie pop singer-songwriters in the Twin Cities, and he’ll be showcasing his songs at 7:30 p.m. Saturday, Nov. 6 at the Stephen B. Humphrey Theater, Saint John’s University in the opening performance of the fall Fine Arts Series at the College of Saint Benedict and Saint John’s University.

His performance comes 19 months after Messersmith’s scheduled Fine Arts Series performance as was canceled in 2020 due to the COVID-19 pandemic.

Messersmith is a thoughtful, clever lyricist with a tender voice. He crafts songs that are catchy and relatable, and span the emotional gamut from poignancy to whimsey. He is one of those rare artists who can break your heart one minute and then put those fragile pieces back together again the next, according to his website.

“He’s a pop genius, with creative ambition to match his songs’ considerable charm,” said an NPR review of his work.

It promises to be a special performance for several reasons, including being the first live, in-person performance in the Fine Arts Series since February 2020.

“One of the things about Jeremy is that a lot of people love him,” said Tanya Gertz, executive director of Fine Arts Programming at CSB and SJU. “He’s charming, he can be witty and his music is upbeat. It’s a great thing to be able to kick off our season with him.”

The concert is also a bit of special project for Messersmith.

“This performance will be unique as he will be performing with his full band and a string quartet,” Gertz said, adding that she expects Messersmith to also break out his ukulele during the show.

Messersmith has released several albums that have received critical acclaim.

“The Alcatraz Kid” was released in 2006, and City Pages newspaper called Messersmith the "premier under-30 songwriter in the Twin Cities." His second album, “The Silver City,” was produced by Dan Wilson of the Twin Cities group Semisonic and was recognized in a press poll as the second-best album in the Twin Cities in 2008,

Subsequent releases have included the digital-only songbook, “11 Obscenely Optimistic Songs For Ukulele: A Micro-Folk Record For The 21st Century And Beyond,” which could be downloaded for free from his website; “Late Stage Capitalism,” when he “dusted off my trumpet from middle school to take a solo during the instrumental break on the song “Purple Hearts;’ ” and, 2020’s "Mixtape for the Milkyway," described by as a collection of sad, beautiful songs” written and performed by Messersmith.

Messersmith will be conducting a ukulele play-along public workshop at 3:30 p.m. the day of the performance in the Choir Room at the Humphrey Theater. Participants are asked to bring their own ukuleles. The workshop is free, but online registration is required due to space constraints.

For the 2021-22 academic year, audience members will be required to show proof of full COVID-19 vaccination or a negative COVID test result taken within 72 hours of the performance. Masks will continue to be required inside of the venue at this time. 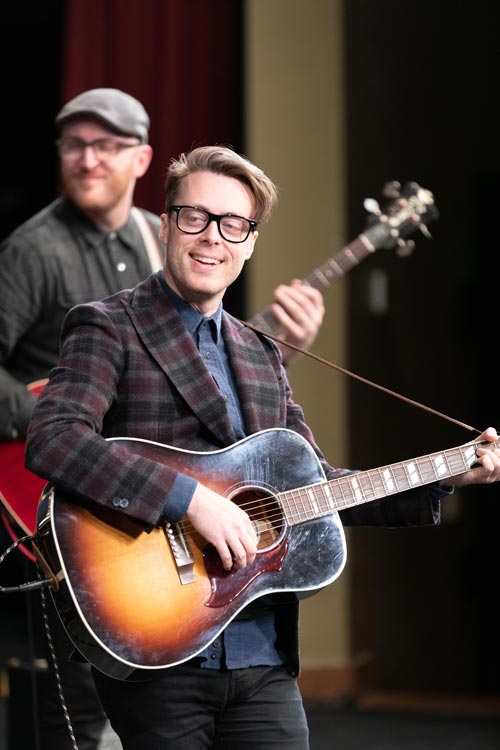