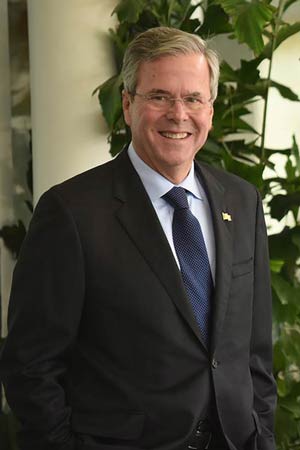 As of Sept. 11, this event is sold out. However,  if you would like to be put on the waiting list should any tickets become available, please call Fine Arts Programming at 320-363-5777.

Jeb Bush was the 43rd governor of the State of Florida, serving from 1999 through 2007. He was the third Republican elected to the state’s highest office and the first Republican in the state’s history to win reelection.

During Bush’s tenure as governor, he was praised for generating widespread economic growth in Florida. He also championed major reform of government, in areas ranging from health care and environmental protection to civil service and tax reform.

His top priority was the overhaul of the state’s failing education system. Under Governor Bush’s leadership, Florida established a bold accountability system in public schools and created the most ambitious school choice programs in the nation. Today, Florida remains a national leader in education and is one of the only states in the nation to significantly narrow the achievement gap.

Governor Bush has led a successful career in the private sector spanning more than three decades, and currently serves as Chairman of Dock Square Capital LLC, a merchant bank headquartered in Miami.

Governor Bush maintains his passion for improving the quality of education for students across the country by serving as the Chairman of the Foundation for Excellence in Education, a national nonprofit education reform organization he founded to transform education in America.

He has written three books, “Profiles in Character;” “Immigration Wars: Forging an American Solution;” and “Reply All: A Governor’s Story 1999-2007.” Governor Bush lives in Miami with his wife Columba. They have three children and four grandchildren.

Among the honors Eichten has received during his career is the Corporation for Public Broadcasting award for best local news program. He also assisted in the development of two Peabody award-winning documentaries. In 2007, he was inducted into the Pavek Museum of Broadcasting's Hall of Fame.

Eichten has also been awarded the prestigious 2011 Graven Award by the Premack Public Affairs Journalism Awards Board for his contribution to excellence in the journalism profession.