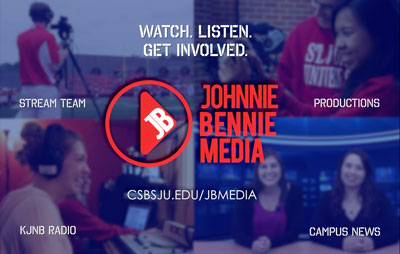 Like many recent college graduates, Kadrian Hill and Anna Skemp are eagerly looking forward to the start of their professional careers.

That said, they wouldn't mind having another semester or two to work with Johnnie Bennie Media, given recent changes in the organization.

Johnnie Bennie Media is a student-run organization that strives to provide engaging learning opportunities for students at the College of Saint Benedict and Saint John's University while producing relevant media content for the campus communities. The goal is to foster media literacy as part of the organization's partnership with Media Services and Clemens and Alcuin libraries.

"When the student clubs merged together, they became an official student organization known as Johnnie Bennie Media, and Media Services agreed to partner with them," said Ethan Wittrock, multimedia technician at CSB and SJU who serves as the adviser for Johnnie Bennie Media and was instrumental in forming the new organization, along with Adam Bauer, Media Services manager, and Dan Sis, media technical manager.

"One of the major differences (between a club and an organization) is the fact that a department has a direct connection to the student group. This means we can help provide guidance to maintain continuity from year-to-year," Wittrock said.

"The (CSB and SJU) administrations encouraged us to make sure control was still in the hands of students. Students serve in leadership positions for each of the four branches of the organization as student managers," Wittrock added. "We meet with them on a weekly basis to check in and see how things are going. Because they are now student employees, we can also hold them accountable to make sure that they're doing what they agreed to do."

Going in the right direction

For both Hill and Skemp, that was a welcome change.

"I was thinking that this would be the best thing for us, and I was on board right away," said Skemp, who also graduated May 7 with a degree in communication. "(Students) would understand that we were part of the media opportunities here at school.

"I definitely see it going in the right direction," Skemp said.

On and off-campus, perhaps the best known of the groups that make up Johnnie Bennie Media is the StreamTeam, which provides live streaming of SJU athletic events (football, soccer, basketball, wrestling and baseball). When the Johnnies' football team played the University of St. Thomas Sept. 26, 2015, 7,167 unique connections were recorded.

"We're really trying to grow the levels of football to basketball and increase the audience for those (sports) as well," said rising junior Kevin Conway, an individualized-film studies major from Western Springs, Illinois, who manages the StreamTeam and replaced Matt Fink '16 and Mike Macken '16.

All hands on deck

Conway said the new relationship should help groom students for working across the different areas.

"We would film games, but we didn't have reporters, and we didn't have a pre-game or a post-game show. The news has some great anchors and reporters, and KJNB has some very knowledgeable sports play-by-play people. It's great to combine forces," Conway said. "We're trying to do more of that, the cross-training."

KJNB Radio has been a student-run station since 1954. It's not a "true" radio station in that it is not broadcast over the airwaves - it's streamed over the Internet. New automation software known as Command Center was recently purchased to allow for operating, organizing and scheduling the streaming audio content. Both the CSB and SJU Student Senates financially supported the purchase.

"As a new organization, I think we have the groundwork to do some pretty neat things," said John Nguyen, a rising sophomore economics and Hispanic studies double-major from Shakopee, Minnesota, who replaced Fink as manager. "The potential is there.

"Because we're made from four branches, I think we should have the potential and cross over into more media usage by the rest of the faculty, staff and students," Nguyen said.

It temporarily calls the video production studio on the fourth floor of the Quadrangle Building at SJU its home, although the new Learning Commons in Alcuin Library will have a state-of-the art video studio, control room and editing room. In addition, two new teleprompters were recently purchased with funding by the Student Senates; they will help the team make the transition from a pre-recorded to a live or live-to-tape broadcast.

"When you talk about dreaming big, we really want to see students developing media literacy as part of their intellectual skill sets. If that's the case, we're not preparing people to be broadcasters, we're preparing them ultimately to be able to express their ideas and share their work in a meaningful way," Wittrock said.