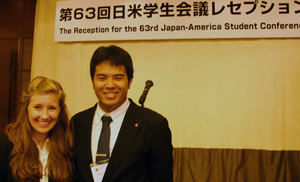 Two students from College of Saint Benedict and Saint John's University spent their summers working to bridge the gap between Japanese and American relations.

Juniors Courtney Kimball and Kunihiro Shimoji participated in the 63rd  Japan-America Student Conference. The month-long conference in Japan aimed to develop relationships between students from Japan and the United States, to strengthen leadership skills, address current issues and generate ideas for the future.

Kimball, a theology and Asian studies double-major, served as one of the 28 delegates from the U.S.

Shimoji, a political science major, attended the conference for the second time.  Last year, he served as a delegate and was elected to the executive committee this year. His promotion required planning of the conference, leading group discussions and serving as a leader to his peers throughout the conference.

Shimoji, originally from Japan, visited his hometown of Okinawa and discussed the problems facing the town with his fellow Americans and Japanese students.

"You can read newspapers and listen to the news, and you pretend you understand the situation, but you can't fully understand until you actually see it," Shimoji said.

Kimball and Shimoji described the conference as being a hands-on experience.  The students traveled to four sites in Japan - Okinawa, Niigata, Kyoto and Tokyo. At each site, they visited with residents to get their opinions about issues, heard from speakers and learned the historical, political and cultural aspects of the sites.

Kimball and Shimoji felt the most meaningful part of their trip was making connections with students who will be the future leaders in bridging the relationship between Japan and the U.S.

"Students represent a unique perspective," Kimball said.  "We are in the stages of finding out who we are and our place in the world.  Because of that, we are really curious and have a deep interest in the world's problems. We are trying to learn how to leave our mark."

Shimoji enjoyed working with students and hearing their different opinions. He believes that different perspectives flourish relationships and new ideas.

"The world is becoming one and more globalized," Shimoji said.  "We have to cooperate with each other, regardless of our race and gender.  We have to accept and forgive those differences to work together for the future."

Kimball and Shimoji plan to share what they learned at the conference with the CSB/SJU community. They will be presenting at a Thursday Forum on Sept. 29, describing their experiences. They will also be guest speaking in CSB/SJU classes.

"Courtney and Kuni will be able to inform the CSB/SJU community about what they learned of the international concerns discussed at the conference," stated Richard Bohr, CSB/SJU professor and director of Asian Studies. "They were the ideal bridge between the local and the global, reminding us that today's world, especially for the next generation of world leaders, is more interlinked than ever before."

This is the second year that CSB/SJU students were selected to represent the U.S. in the Japan-America Student Conference. Kimball and Shimoji hope to recruit students to participate in the conference next year, which will be held in the U.S.

Kimball said that she would like CSB/SJU students to "keep the connection alive."