Dr. James Mullen Jr. has been named transitional president of Saint John’s University by the Board of Trustees.

The announcement was made today to the campus community by Dan McKeown ’85, chair of the Board of Trustees.

“He’s an experienced president, and he’s got a great track record in higher education. We are pleased to have Jim’s leadership and guidance to help us with this unique transitional year,” McKeown said.

“I’m tremendously honored to join the Saint John’s community at this moment in its history,” said Dr. Mullen, whose duties as president officially start June 1. “The Benedictine tradition and their devotion to higher education and community is inspiring. To have a chance to be part of this educational community during this transitional period is both exciting and humbling.”

Dr. Mullen follows Dr. Eugene McAllister, who has served as interim president for the past two years. President McAllister will be returning to his family in Montana, and Saint John’s is deeply grateful for his service.

“He mentors other leaders in higher education,” McKeown said. “He’s a good match for Saint John’s and for this unique moment in time.”

“I’ve had the privilege of being president of three liberal arts colleges,” said Dr. Mullen, who also has served as president of the College of Our Lady of the Elms in Massachusetts (2005-08), chancellor of UNC-Asheville (1999-2005) and vice president of Trinity College in Connecticut (1995-1999). “My entire life has been framed around the impact that the residential liberal arts experience can have.”

At Saint John’s University, Dr. Mullen will work closely with College of Saint Benedict Interim President Laurie Hamen to help move the schools toward strong integration with a single leadership and governance model, pending approval by the Higher Learning Commission.

“I also look forward to working with faculty, students and staff as we move forward, following the highly regarded leadership of Gene McAllister.”

Dr. Mullen plans to be on campus in early May to work with President McAllister, President Hamen and the campus community during a transition period. His tenure as transitional president is intended to extend through June 30, 2022.

The Boards of Trustees of Saint John’s and Saint Benedict plan to lead a search for the first joint president of the two institutions later this fall, pending approval by the Higher Learning Commission. 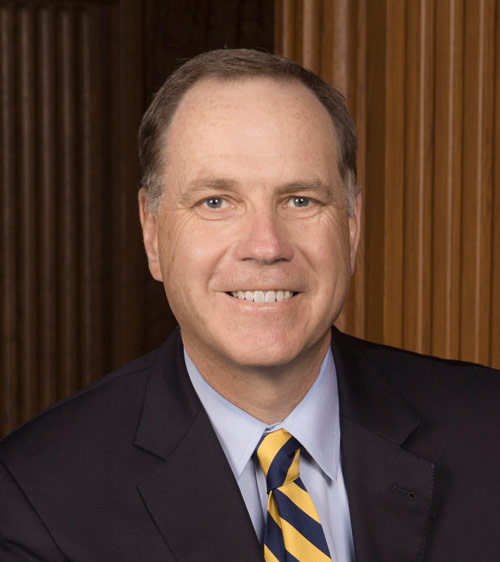