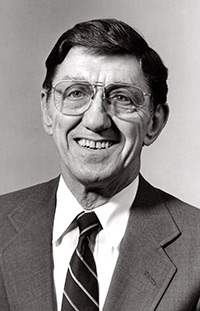 Stanley Idzerda, Ph.D., president emeritus of the College of Saint Benedict, died on Tuesday, Aug. 6, at the age of 93.

Idzerda was the eighth president of the college, serving from 1968 through 1974, and the first lay president of a women's college in Minnesota. He was a scholar, an innovator and an educator. He was also a courageous U.S. Navy veteran, a survivor of the attack on Pearl Harbor while serving aboard the USS West Virginia.

In 1968, Idzerda, his wife, Geraldine, and their seven children moved to St. Joseph, Minn., when he became the president of CSB. During his presidency, the college experienced record growth in enrollment, and new academic programs in nursing, East Asian studies, physical therapy and liberal studies were added to the 29 existing majors. The college's first study abroad program, summer classes, and employment of student workers also started under Idzerda's leadership.

Five years after retiring as president, Idzerda returned to the College of Saint Benedict to serve as a history professor until his retirement in 1990.

The College of Saint Benedict recently named the Idzerda Community Center in Centennial Commons in honor of Idzerda's leadership at a critical time in the college's history.