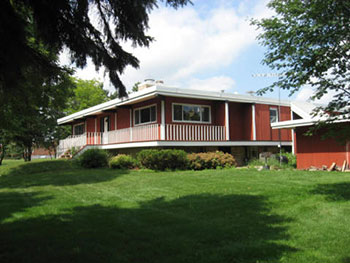 Idzerda House, located on the south end of the College of Saint Benedict campus, is scheduled to be burned Saturday, Aug. 3. St. Joseph Fire Department is using the house to practice and prepare for firefighting.

Idzerda House was built in 1959, using an original design including broad cantilevers and a significant wooden beam structure. The house was purchased by Saint Benedict's Monastery in 1966, and four CSB presidents lived in the home between 1968 and 1996. CSB acquired the home in 1981 and named it for former president Stanley Idzerda who lived in the house with his family from 1968 to 1974. Idzerda House became student housing in 1996, and the house accommodated 12 students during the academic year.

Idzerda House is being demolished due to structural problems. The cantilever structures have rotted over time, primarily due to the method of construction and design. The nature of the design and building practices of the era make any repairs or updates quite costly. In addition, the home is not energy efficient and, due to construction methods, cannot be improved. After the burn, the area near the campus' south entrance will be restored to grass. Further, the college's Campus Facility Master Plan calls for removal of the house to accommodate future renovation and expansion of the Haehn Campus Center.