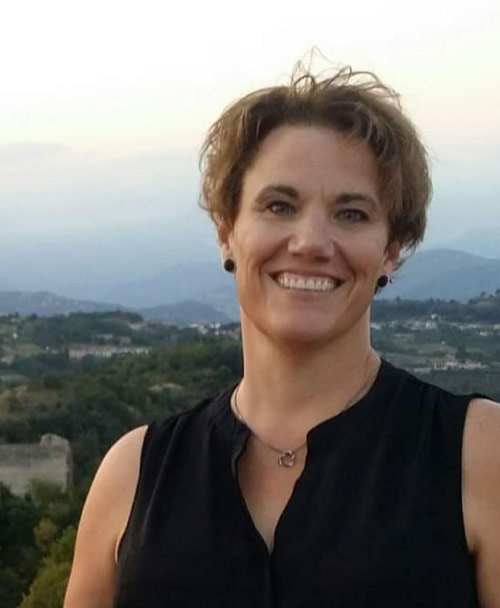 Diane Houghton has a somewhat unique perspective to offer on the ongoing COVID-19 pandemic.

That’s because the 1998 College of Saint Benedict graduate has now seen it unfold on two continents.

Houghton – originally a 1989 graduate of St. Cloud (Minnesota) Apollo High School – makes her home in Vicenza, Italy where her husband works for the U.S. government at Casema Ederle (Camp Ederle), a military installation where U.S. troops are stationed.

The city is located in the northeastern portion of the country – the region that was hit first when the virus began spreading in Italy late last winter. It’s just 20 minutes west of the site of that country’s first major COVID outbreak, and an hour east of Bergamo, a city that was hit hard - overwhelming the health care system there for a time.

“We were sandwiched right between two hotspots of what led to a complete shutdown,” she said.

“And once things shut down, they really shut down. People didn’t move. You had to have documents to travel anywhere. And by anywhere, I mean going a distance as short as from St. Cloud to Waite Park.

“But people understood it was a health crisis and didn’t fight it. Everyone seemed to comply.”

Houghton saw first-hand the devastation the virus was causing.

“It was nerve-wracking because there’s an assisted living/nursing home facility across the street from where we live and we saw ambulances there frequently,” she said. “People in hazmat suits were walking around. This was all happening right in front of us. One of our neighbors is a nurse at the hospital and he said they were overwhelmed there. They were sending people anywhere else they could.”

But gradually, she said, life began to return to some semblance of normalcy as spring turned to summer.

“We weren’t wearing our masks outside anymore, and we were actually able to get over to the beach in Croatia,” she said.

But in late July, she and her daughter (who was enrolling at the University of Minnesota) flew to the U.S., where her three oldest children already reside. A son currently attends the University of Wisconsin while a daughter in Virginia just gave birth to her first grandchild.

“It was hard when we first got here because the numbers in Italy had gone down, although they’ve since started to go back up a little,” she said. “But things there had gotten at least somewhat back to normal.

“Then we came here where the virus is still spreading. And we first went to Washington D.C. where the rules were really strict. We weren’t sure what was going to be happening with the colleges as far as starting on time. So we plunged back into it in a way.”

Houghton’s travels have taken her from Virginia back to the Midwest. And she’s been surprised to see the way the response to the virus has varied from place-to-place, as opposed to the more uniform response she observed in Italy.

“I do have to say that I’ve been shocked at the number of people here who still aren’t taking it seriously,” she said. “I think it’s become political. And that’s a real shame. Because this isn’t a political issue. It’s a health care issue.”

Houghton’s husband remains in Italy. But for now, she plans to remain here to be more immediately available if her family needs her.

“I haven’t bought a ticket back yet,” Houghton said. “We didn’t know if the U of M would be delayed, and if I would have to take my daughter back with me. And I wanted to take some time to be here with our first grandbaby.”

Having seen COVID spread in both Italy and the U.S., Houghton stressed the importance of following the recommendations of medical experts.

“I know it seems overwhelming,” she said. “And no one wants to shut their lives down completely. But if we all just do a little bit – and follow the advice the CDC has given – I think we’d be amazed at how far we could go toward getting this under control.”