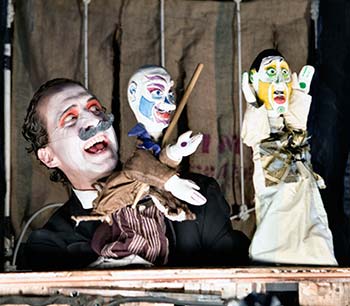 High art meets low when the words of 20th century writers are given voice in puppeteer Blair Thomas' production of "The Hard Headed Heart," a cabaret that features wooden puppets, rolling paper scrolls and a one-man band.

The Puppet Show of Don Cristobal: Based on the bawdy script by Federico Garcia Lorca, this play, performed with wooden hand puppets and a drum kit, is a humorous retelling of the traditional trickster Don Cristobal's wooing and marriage to the delectable Dona Rosita.

St. James Infirmary: Based on the traditional New Orleans folksong, this is a clever, romantic show whose main character is faced with the death of his lover. This piece is performed with rod marionettes, a motorized paper scroll and a one-man pit band.

The Blackbird: Based on the Wallace Stevens poem "13 Ways of Looking at a Blackbird," this play is an inventive shadow puppet show that examines what happens when doubt inexplicitly finds its way in between the love of a man and a woman. This piece is performed on a set of four rolling scrolls, lit entirely by lamplight.

As founder of the highly successful Redmoon Theater in Chicago, Thomas spent a decade leading a vision to create large-scale spectacle theater. He was the principal creator behind productions such as "Frankenstein," the Winter Pageant, and All Hallow's Eve Halloween parade until he left in 1998. Blair then served as co-curator for both of Chicago's International Puppet Festivals in 2000 and 2001 and became an associate adjunct professor at the School of the Art Institute of Chicago.

In 2002, Blair founded Blair Thomas & Co., which has built a repertoire of work for adults and for children. He was awarded the Illinois Arts Council Fellowship for New Performance in 2002 and 2004, and was hand-picked to serve in the inaugural position of Jim Henson Artist-in-Residence at the University of Maryland in College Park for the 2006-07 academic year.