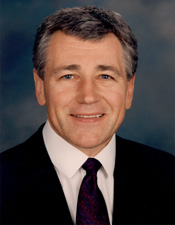 In 1967-68, Minnesota Sen. Eugene McCarthy opposed President Lyndon Johnson’s policies regarding the Vietnam War – even though McCarthy initially supported the Gulf of Tonkin Resolution that authorized American use of force in Vietnam.

On Aug. 25, 2005, Nebraska Sen. Chuck Hagel became the first Republican senator to publicly criticize the Iraqi War and call for the withdrawal of American troops – even though Hagel initially supported the use of force in Iraq.

Almost 40 years apart, McCarthy and Hagel spoke out and challenged a U.S. foreign policy position advocated by the sitting president of their own party.

Hagel will deliver the third annual Eugene J. McCarthy Lecture at 7:30 p.m. Wednesday, Sept. 23 at the Stephen B. Humphrey Theater, Saint John’s University. The lecture, which is free and open to the public, is sponsored by The Eugene J. McCarthy Center for Public Policy and Civic Engagement, and is co-sponsored by the SJU University Chair in Critical Thinking.

Hagel, a native of North Platte, Neb., served in the Senate from 1997 to 2009 (he was not a candidate for reelection in 2008). He served on four Senate committees: Foreign Relations; Banking; Housing and Urban Affairs; and Intelligence and Rules.

A graduate of the University of Nebraska-Omaha, Hagel served in Vietnam with the U.S. Army, where he earned two Purple Heart awards. Following his tour of duty, he was a newscaster and talk-show host in Omaha.

His career in Washington began in 1971, when he became an administrative assistant to Nebraska Congressman John McCollister, serving until 1977. Hagel then became manager of government affairs for the Firestone Tire and Rubber Company (1977-80) before returning to the governmental sector as deputy administrator of the U.S. Veterans Administration (1981-82).

After leaving the Veterans Administration, he became an investment banker and business executive in Washington and Omaha. Hagel was named deputy director and chief executive officer of the Economic Summit of Industrialized Nations (G-7) in 1990.

Hagel has also co-written a book, America: Our Next Chapter: Tough Questions, Straight Answers (Ecco Press, 2008), with Peter Kaminsky. Former Secretary of State and retired Gen. Colin Powell said that Hagel “writes with insight, expertise, authority and with the credentials that come from his dedicated service in war and peace.”

The Eugene J. McCarthy Lecture was established in January 2006. McCarthy spent seven years as a student at Saint John's Preparatory School and University, and nearly one year as a member of the Benedictine community of Saint John's Abbey.

The lecture series carries on McCarthy's deep commitment to the ideals and principles of democratic self-government. It seeks to inspire a new generation of young people to pursue fresh ideas, to challenge the status quo, to effect positive change in their communities and, like McCarthy himself, to lead with honesty, integrity and courage.

Past lecturers in the series have included newspaper columnist, author and commentator E.J. Dionne (2007), and civil rights leader Julian Bond (2008).