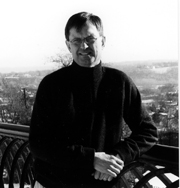 Haeg, a 1967 graduate of Saint John's University, has a growing portfolio of books, including his latest effort, "Harriman vs. Hill: Wall Street's Great Railroad War (University of Minnesota Press, 2013).

The book, which focuses on the battle over control of the Northern Pacific Railway between Edward Henry Harriman and James J. Hill and the ensuing changes in American business, is one of four finalists in the general nonfiction category of the 26th annual Minnesota Book Awards. The winner will be announced Saturday, April 5, at the St. Paul Union Depot.

Haeg is a former executive vice president of corporate communications for Wells Fargo & Company and a former broadcast journalist. He is also a former trustee at the College of Saint Benedict.

His previous books include "In Gatsby's Shadow: The Story of Charles Macomb Flandrau" and "Saint Benedict's Rule for Fair Play in Sports."