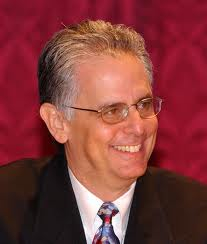 Daley-Harris will speak on "Reclaiming Our Democracy for the Common Good: Challenging World Poverty and Climate Change Through Civic Action." The event is free and open to the public; a book signing will follow.

Daley-Harris is a political author and international social activist. As a pioneer and global leader in the field of microcredit, he has been a close collaborator of Nobel Peace Prize Laureate Muhammad Yunus, and is lauded by Ashoka founder Bill Drayton as "one of the certified great social entrepreneurs of the last decades."

He founded the global citizens' lobby RESULTS in 1980 and launched the International Microcredit Summit Campaign in the 1990s - which has provided microloans and hope to over 100 million of the world's poorest families. He has since guided the emergence the influential Citizens Climate Lobby and recently established the Center for Citizen Empowerment and Transformation.

Daley-Harris' book, "Reclaiming Our Democracy: Healing the Break Between People and Government," was hailed by former President Jimmy Carter as "a road map for global involvement in planning a better future."  It has just been reissued in a 20th anniversary edition.

The recipient of numerous awards, Daley-Harris has been honored by the Temple Award for Creative Altruism from the Institute of Noetic Sciences; the Caring Award from the Caring Institute; the Innovator Award from the Marriott School of Management at Brigham Young University; the Elliott Black Award from the American Ethical Union; and the Susan M. Davis Lifetime Achievement Award from the Grameen Foundation.

This event is being organized and sponsored by the CGE at the College of Saint Benedict and Saint John's University, with support from The Eugene J. McCarthy Center for Public Policy and Civic Engagement at SJU.