Give CSB Day tops half a million dollars

At some point, tens of thousands of generous donors have stood up in support of scholarships at the College of Saint Benedict (CSB). That’s impressive and encouraging.

On Wednesday, Oct. 2, over a thousand of them stood up on the very same day. That’s overwhelming and heartwarming.

All those donors worked together to contribute more than half a million dollars toward initiatives including scholarships for the 95% of today’s Bennies who rely on them. And that is pretty mind blowing.

That’s the largest single day of giving in CSB history.

As in past years, a key component of Give CSB Day success was the $250,000 in matching funds contributed by 18 leadership donors. That allowed alumnae, parents, friends, faculty, staff and even students to make gifts on Give CSB Day knowing their contributions would be doubled (and, in some cases, tripled).

A dramatic new twist to this year’s Give CSB Day effort though, was the introduction of smaller campaigns within the larger effort – campaigns for clubs and organizations on campus, for CSB Athletics and for CSB/SJU Fine Arts Programming. This allowed coaches, alums, fans and supporters to become active advocates and rally their personal social media networks.

“The Swim and Dive Team really rallied together for Give CSB Day,” says Head Coach Mandy Wolvert. “We had team goals of $2,000 and 70 donors, and the athletes’ excitement and activity helped us blow by both of those! The dollars received will go toward team suits, equipment and travel expenses.”

Breaking the half-million-dollar mark was an emotional experience for Director of Annual Giving Maggie Weber Utsch ’00 and her team. “I will never forget that moment. So many people believe in this place and the students who are here. Our goal is to do all we can to provide as many scholarships as possible so that finances are not an obstacle to a Saint Ben’s education.”

*49 donors chose to make more than one gift. 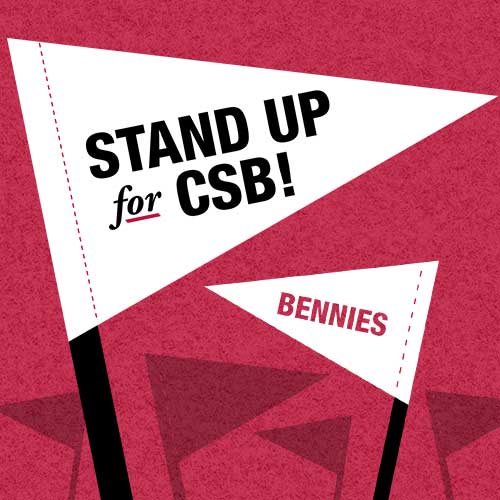