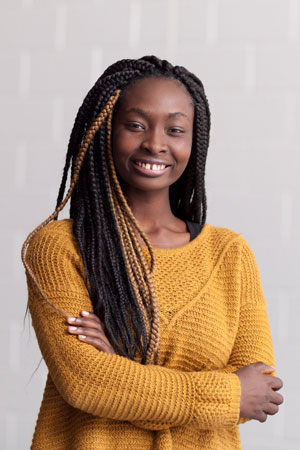 Victoria Adofoli '14 will serve in Malaysia. 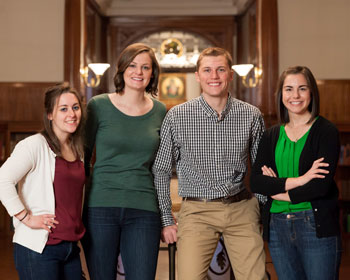 Three seniors and two graduates of the College of Saint Benedict and Saint John's University have received awards from the Fulbright Program.

Barkley, a senior Hispanic studies major from Sartell, Minnesota, has a passion for adventure and travel. He spent a year abroad, first in Chile for a semester, then Spain for second semester, and has done multiple Alternative Break Experience trips, one of which was to Ecuador. He oftentimes travels with his family. Barkley chose Mexico for two reasons. "One was, I knew I wanted to go to a place I've never been because you can go there with a completely open mind. ... The other reason was because of the proximity it has with the U.S.," Barkley said.

Maus, a senior peace studies and political science major from Kimball, Minnesota, learned about the program from a friend who is currently completing a Fulbright award. She said she was "instantly intrigued" after learning about the program from her. "I chose Malaysia because I would like to expand my knowledge of Islam. I have had a deep interest in the religion since I traveled to the United Arab Emirates my first year at CSB/SJU, and living in Malaysia, a Muslim majority country, will allow me to do just that. ... I am excited for the challenges I will face. I have come to realize that I learn the most when I am outside of my comfort zone."

Speltz, a senior from Altura, Minnesota, will be heading to Bulgaria with the hopes of making a difference in the world. The economics and peace studies double major is looking forward to immersing herself into such a rich culture. During her time there, Speltz will be teaching high school students as well as setting up a knitting club to help build community. "This experience is going to help shape me," Speltz said.

Adofoli, a native of Ghana, majored in peace studies and political science at CSB. She said the award offers a "unique opportunity to learn about Southeast Asian countries and about girls' rights and education in the region." Adofoli is eager to learn about the community she will be placed in. "I hope the Fulbright will help my plans to obtain graduate degrees in international development and nonprofit management."

Fredrickson, a native of International Falls, Minnesota, graduated with a degree in English. She finished student teaching in December and currently has a long-term substitute teaching position in Chanhassen, Minnesota. Fredrickson is excited to put her classroom experience to use in Greece. "I knew I would get a lot of student-teacher interaction in Greece, which is what I was really looking for," Fredrickson said. She is also a licensed English as a second language teacher and believes the Fulbright program will help her better understand her students by immersing her in an unfamiliar language and culture.

The Fulbright Program, established in 1946, is the flagship international educational program sponsored by the U.S. government and is designed to increase mutual understanding between people of the U.S. and people of other countries.

The primary source of funding for the Fulbright Program is an annual appropriation made by the U.S. Congress to the Department of State's Bureau of Educational and Cultural Affairs. Participating governments and host institutions, corporations and foundations in foreign countries and in the U.S. also provide direct and indirect support.

Recipients of Fulbright grants are selected on the basis of academic or professional achievement, as well as demonstrated leadership potential in their fields. The program operates in over 155 countries.